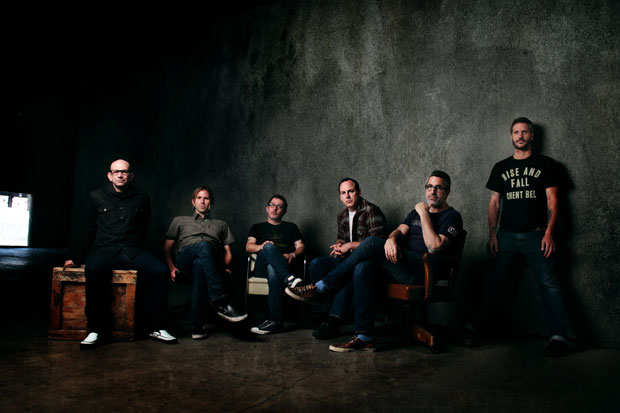 You aren’t always the music you make. Bad Religion co-founder Brett Gurewitz spends most of his time running Epitaph Records and as a family man whose musical tastes run more to soul and classic psych than aggressive hardcore. But when recording as Bad Religion, Gurewitz can’t escape his lifelong inclination towards stinging melodies and roadrunner tempos. The band’s sound is, the newly 50-year-old guitarist explains, “in his DNA,” and it’s heard in fine, furious form on the upcoming True North, a conscious reclaiming of Bad Religion’s classic, late-’80s Suffer style.

Gurewitz, whose wife recently gave birth to a baby girl, spoke with us from his home in Pasadena about the new album, his tumultuous relationship with his Bad Religion co-founder and songwriting partner Greg Graffin, and the one BR album he finds embarrassing.

Has having a baby and turning 50 over the past several months changed your creative perspective at all?
I definitely have a new perspective, but it’s been more of a gradual transition than a light bulb that came on at the big five-o. I look at things as a continuum. I’m not a big planner. I like to go with the flow and see what unfolds. But I will say that with the onset of senescence I’ve got a very different perspective, and one that I hadn’t anticipated. I’m enjoying my life, ya know? And I really enjoy the modality of songwriter-artist, which I’m grateful I can continue to have.

Are you at all surprised that punk rock continues to be a fruitful outlet for you at this point in your life and career?
It’s surprising to me because I don’t listen to it habitually. So periodically when the guys and I set our minds to making a record, it’s surprising that it’s still there. I have a rich life, and it’s somewhat compartmentalized, and being punk rock is honestly the least of it. But there are truly very few things I enjoy more than writing punk music and creating the records and then cranking up the results on some good speakers. It’s immensely gratifying for me. My life would be very empty without it.

Your early albums gave voice to disaffected teenagers. Who does True North give voice to?
It gives a voice to me and Greg. But the human experience is universal, so that when people express themselves through art, the whole point of it is to connect with somebody. I feel like music is the most immediate form of art for doing that. It’s very tough for me to be moved by a painting. I’m not saying it can’t happen, but music has the power to move me to tears, and it’s happened frequently in my life. Music is primal, and if you can express something that’s honest with music, you’re going to connect with people. When we write, if we’re successful with a song then we’re connecting with other humans. I don’t know who [those humans] are anymore. For the most part, people outgrow punk rock so we’re connecting with younger people, but there are a few people who have grown with us and stuck with the band.

True North is 16 songs in 35 minutes. Tell me about the decision to be so concise.
The whole thing was a very conscious decision, and it was sort of remembering who we are and what we’re good at. We came out of a very specific scene, playing a very specific kind of music with a very specific kind of philosophy, and ultimately we evolved into what was really just an American rock band. By the time we put out Stranger Than Fiction in ’94, we were playing big, sprawling anthems. We had a gold record. We had a radio hit or two. And that’s allowed. Groups and artists need to evolve, and that was also really exciting, but that’s not who we are, and that’s not what we were ever aiming for. All we ever wanted to be was an L.A. hardcore band. My experience in life is that your greatest successes come as side effects of trying for something else. And that’s really what happened when Bad Religion became a mainstream crossover band. But it occurred to Greg and I that, rather than trying to recapture that, what we should be trying to recapture is the thing that led to that.

This far into your career, is Bad Religion leading by example? Do you see yourselves as elder statesmen?
Either that or we’re overstaying our welcome. I look at people like Neil Young, who don’t ever have to stop. I don’t know if we’re leading by example, but I do think there’s a place for us, and I do think it’s important to have some humility. It’s important for artists to understand and cherish what was special about the stuff they did in their youth. I love Van Morrison, but he might never be able to do anything as good as “Gloria,” and he did that when he was 16 and that might be hard to live with. I can totally live with the fact that Suffer could be the best thing I ever did in my life. On the other hand, if I’ve achieved some great moments in my art when I was in my teens and early 20s, I don’t want that to be so intimidating that I can no longer have creative output. I’m not gonna be able to write, “Do what you want / Do all you can / Break all the fucking rules / And go to hell with Superman / And die like a champion.” [From Suffer’s “Do What You Want.”] I don’t feel that today, but it’s awesome that I was able to write that when I was in my early 20s.

Ultimately, maturing the lyrical content is just another way of evolving.
We’re definitely evolving. The crux of it is, I’m very proud of the new record. I’ve never worked on a Bad Religion record I’m embarrassed of. Well, other than [1983’s prog-oriented] Into the Unknown. But the other 15, there’s not a single one I’m embarrassed of, which is saying something. But I’m particularly proud of the new one.

Maybe Unknown is just your version of Neil Young’s Trans!
But worse.

You and Greg have had a tough relationship at times. How do you and he avoid divisiveness?
The way we avoid it is we already had it. We’re like the rare married couple that gets divorced, realizes they were in love, remarries, and it works out from there. We were bitterly divided during the Stranger Than Fiction record and that’s when I quit the band. When we came back together, we’d both grown as people. But I think we realized what we meant to each other. We were fans of each other’s writing, but we also realized that we had so much in common. We both love nature, we’re both backpackers. We both love the same kinds of music and we both have families. After rejoining the band for [2002’s] The Process of Belief  we’ve been closer than ever.

Is it weird, in retrospect, that all the band’s personal history is so widely known?
No, I don’t mind it. I’m reading a book right now by [public intellectual] Nassim Nicholas Taleb called Antifragile: Things That Gain from Disorder. Rock musicians gain from disorder. If there’s some negative press out there about me and Greg or me in particular, it’s not gonna hurt me as a punk musician. It’s just gonna add to my reputation. It’s not like Keith Richards’ shenanigans ever hurt him either. Not that I’m putting myself at that level. If you’re a banker and you had struggles with chemical dependency, that could ruin your career. If you’re a guitar player in Bad Religion, that’s not gonna matter. As you long as you make good records, you’re antifragile.

Bad Religion – “The Kids Are Alt-Right”