‘American Idol’: Not Even the Minaj/Mariah Steel Cage Match Can Get People to Watch 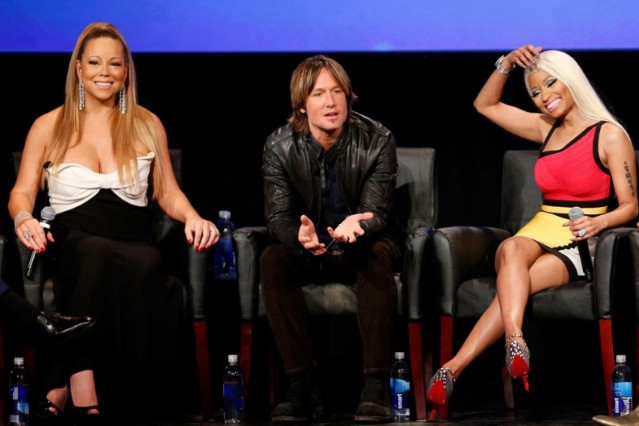 Not even the contrived feud between Nicki Minaj and Mariah Carey could save American Idol’s ratings last night (January 16). As Reuters reports, viewership for the first night of the singing contest’s two-part Season 12 premiere plummeted 19 percent compared with Season 11’s opening episode. An estimated 17.9 million people tuned in to witness Minaj, Carey, and country star Keith Urban’s inaugural turn at judging the latest round of hopefuls — a significant drop from the 21.9 million who watched last year’s kick-off broadcast.

Yesterday’s two-hour telecast also finished as the least-watched season opener in Idol history, a distinction that previously belonged to 2012’s premiere (this excludes the show’s first episode, which debuted in June 2002). Idol also took a hit in the much-coveted 18 to 49 age demographic, down 19 percent from last year. Despite that disappointment, the reality competition ended up being the most watched television show in the U.S. on Wednesday night, beating the other three major network’s combined programming in the 18 to 49 group. FOX executives also mentioned that Idol pulled in 46 percent more viewers than the September debut of NBC’s rival show The Voice.

Still, these figures illustrate a steady decline in American Idol’s draw. The 2012 finale — which wrapped up what became Steven Tyler and Jennifer Lopez’s farewell season — was the lowest rated in the show’s history, and represented a 32 percent dip in the 18 to 49 audience from 2011’s closer.

It also didn’t help that the January 16 episode didn’t offer much in the way of entertainment (Vulture aptly titled their recap, “The Battle of Who Could Care Less”). The good singers were competent, the weaker ones weren’t especially awful or memorable, and aside from a few glittered eye rolls and weary sighs, the rivalry between Minaj and Carey didn’t amount to much. FOX gets a a do-over tonight (January 17), when the second part of American Idol’s Season 12 premiere airs at 8 p.m. EST, but as the Hollywood Reporter points out, the Thursday broadcast historically brings in lower ratings than the Wednesday airings.