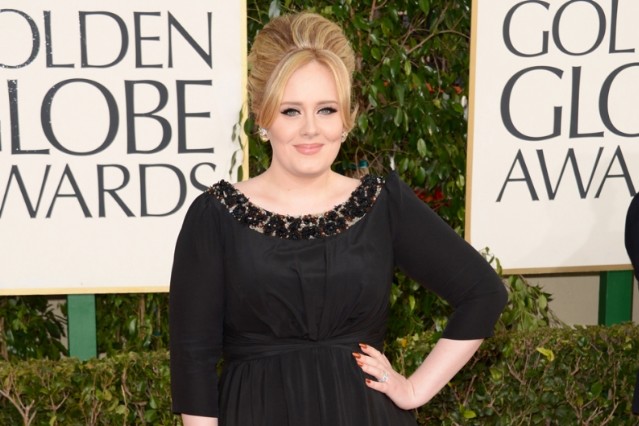 It’s a victory for classic themes recycled and retooled with 77-piece backing orchestras and the world’s most beloved vocalist! As with all awards she’s been nominated for since 21, Adele of course won the 2013 Golden Globe for Best Song for “Skyfall,” her theme to the James Bond film of the same name. She beat out Taylor Swift’s “Safe & Sound” from The Hunger Games, Jon Bon Jovi’s “Not Running Anymore” from Stand Up Guys, Keith Urban’s “For You” from Act of Valor, and the Hugh Jackman-sung “Suddenly” from Les Misérables.

The win bodes well for Adele’s shot at an Oscar next month — and reinvigorates our will to watch — when “Skyfall” goes up at the Academy Awards against Scarlett Johansson’s Chasing Ice exit music “Before My Time,” “Everybody Needs a Best Friend” written by Seth McFarlane and performed by Norah Jones for Ted, “Pi’s Lullaby” from Life of Pi, and Les Mis’ “Suddenly” again.

The new mom gave another endearing thank-you speech, this time without so much snot, as also-nominated Taylor Swift stared daggers from her table below the stage. Read it below.

“Oh my god, honestly I’ve come out for a night out with my friend Ida, we’re new mums, we’ve literally come for a night out. I was not expecting this! Thank you so much! It’s very strange to be here, thank you so much for letting me be a part of your world for a night. It’s amazing, we’ve been pissing ourselves laughing, all of you. I’d like to thank the Hollywood Foreign Press, I’d never thought I’d ever say that. Sony Pictures — oh sorry — MGM, Sam Mendez, Paul Epworth who I did the song with, Daniel Craig, you’ve been such a wonderful Bond. And this is for my boyfriend Simon who convinced me to do it and my lovely son. Thank you so much!”