“We’re gonna take it back to a time when there were no cell phones that could take pictures,” Karen O said last night before popping the top of her neon-green-lit microphone entirely in her mouth, dropping her hands, and screeching “Art Star” from Yeah Yeah Yeahs’ self-titled 2001 EP. Her request was granted, but only briefly; it was hard for anyone to resist snapping pics of the frontwoman in her zebra-print cape and LCD cat-eye sunglasses as the band played an insanely small venue — Brooklyn’s 150-capacity Union Pool — to raise money for Hurricane Sandy relief organization Waves 4 Water.

The band’s 12-song set — their first NYC show since a Jonathan Toubin benefit almost exactly a year ago — toured their entire catalog, from Fever to Tell favorites “Black Tongue” and “Tick” to Show Your Bones‘ “Gold Lion” and “Phenomena” to It’s Blitz!‘s glittery “Heads Will Roll” and “Soft Shock,” with a hidden track (“Poor Song”) and a soundtrack contribution (Spider-Man 3‘s  “Sealings”) in the mix, too. The trio, plus touring keyboardist/bassist/guitarist Dave Pajo, sounded re-energized, focused, and sharp. Drummer Brian Chase, still nurturing a lush George Harrison beard, grinned almost as often as the band’s singer, who sported a shiny wedding band on the hand encased in a fingerless black leather glove. Guitarist Nick Zinner, celebrating his birthday with the friends-and-family-heavy crowd, did his usual impressive musical heavy-lifting, swaying in a corner of the tiny stage.

Knowing a YYYs album is on the horizon, fans’ ears were trained for something new, and the band delivered late in the set: “Despair,” a spare thumper that recalled Florence and the Machine’s “Dog Days Are Over,” with Karen O singing about wasted days, nights, years, life. She struck a melancholy tone, crooning about tears stinging her eyes, but concluded clear and assured, “Nothing to fear” as the track ramped up and she hopped around, punctuating the swelling music with her signature staccato “Hey!”s.

So far no video of the new track has hit YouTube, so maybe Karen O got her wish after all. Yeah Yeah Yeahs’ fourth studio album is due in spring 2013, just in time for the tenth anniversary of their Interscope debut. 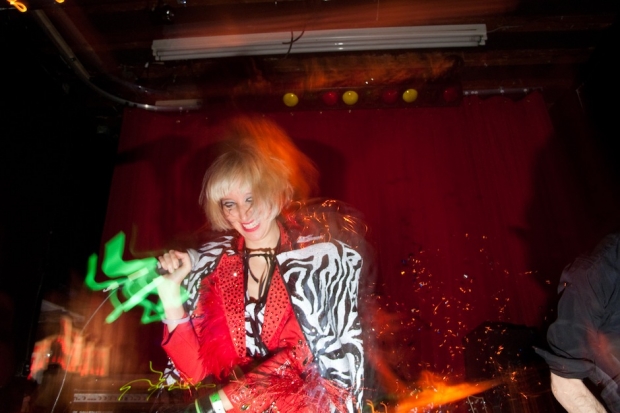 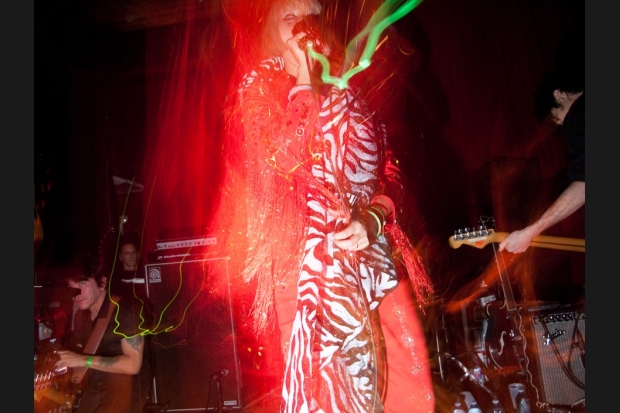 We Were There, Yeah Yeah Yeahs