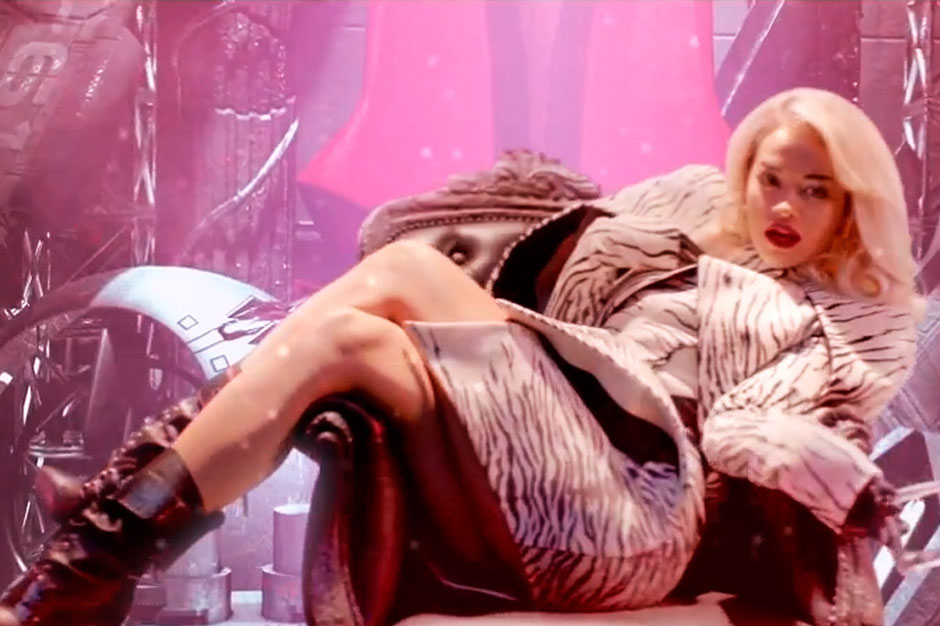 Jay-Z Illuminati conspiracists will surely find a lot to discuss in Rita Ora’s new video for “Radioactive,” but style hawkeyes might discover something more pressing: the RocNation rookie is looking like a don diva. Specifically, she’s burning up in one of our favorite pop star-outfitting designers, Asher Levine, in the signature texture from his Battlestar Galactica-invoking spring 2013 collection. Her snow leopard power suit has on-duty boss written all over it, but Levine custom-crafted a vinyl catsuit that the video’s animators saw fit to translate into her hologram body double (comes in around 2:25), and the space uniform’s extra-long-sleeved second skin takes Rita where she’s not yet gone before. Also, does this warrant a discussion of the mock turtleneck, and how it can possibly be functional/not dowdy in 2012? It definitely does.

The track is great — producer Greg Kurstin doing mainstream dance for chart status but also invoking the percolating burble of Robin S.’s “Show Me Love” at the bridge, a house bow that winches nicely with Ora’s Sia-written vocals. More importantly, its dancefloor quotient will hopefully move the laser pointer from Ora’s quasi-ex Rob Kardashian’s misogynist, slut-shaming Twitter rant about her alleged infidelities back to the emerging pop singer’s music, which is its most promising when she’s in her native dance zone. Random fact: She and DJ Fresh scored the first drum-n-bass track to hit No. 1 on the U.K. pop charts. She’s embarking on the Radioactive tour of the U.K. in January, and hopefully her first album Ora will get a push in the States after that, because for all the TMZ B.S., it’s very good, like a more comfortable dance-underground follow-up to Rihanna’s underrated Rated R. At just 21, Ora is quickly becoming one of our blond-haired, red-lipped style faves, and thankfully would never wear brogues on stage.