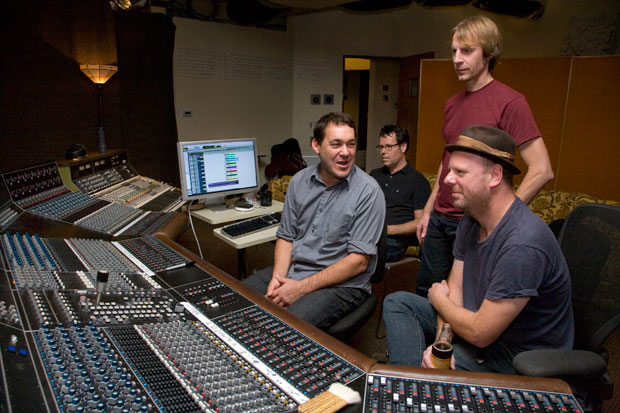 “I sang Minor Threat’s “Filler” with Bitch Magnet a couple of weeks ago and I had to cram to get it together, so it’s been running through my head since. I also just did a couple of Scientists songs with the Melvins and those songs have been going through my head for weeks. And our Sonics cover band, which plays on very, very limited occasions, played a benefit for [Brooklyn’s] Norton Records and now I can’t stop hearing ‘He’s Waiting.’ It’s just going over and over and over in my head, even now.” This is Mudhoney frontman Mark Arm musing on the effects of a well-crafted hook, much like the one that slithers through “What to Do With the Neutral,” a gloriously sleazy highlight on Vanishing Point, his legendary Seattle outfit’s ninth studio full-length, due April 2 on Sub Pop. “There’s something about the riff and clavinet part in that one,” he says, drily. “It’s been in my head, too. Getting to sleep can be really annoying.”

Their first outing since 2008’s The Lucky Ones, Vanishing Point came together over the course of two long weekends this past April and September at Seattle’s Avast! Recording Co. (birthplace to local classics from Bikini Kill, Soundgarden, Love as Laughter, and Fleet Foxes), Mudhoney convening for what Arm says was a process very much in step with how the foursome has worked since 1988. “We amassed a pile of riffs and ideas, and I went through them and tried to come up with words that suited them,” he deadpans. “Pretty exciting.”

It is exciting. Arm’s singular sense of humor remains (on the lyrics to “Douchebags on Parade”: “We just like being downtown on a Friday night.”) sharp and primary guitarist Steve Turner’s licks definitively dirty. But it hasn’t been easy. “I actually had a kind of block on lyrics for a long time,” Arm says. “I don’t know what it was, but part of it, I think, was that I was just devastated after my friend [and Sub Pop executive] Andy Kotowicz died. I was in a deep funk for a long time and I couldn’t clear it. The older I get, the pickier and more conscious I become about what I’m singing. We definitely wear our influences on our sleeves, but hopefully, we’re finding an original way to say something, even if it’s been said so many times before. It’s not always possible, but that’s what I beat myself up over the most.”

And after 24 years together, Mudhoney remain one of halcyon Seattle’s longest-running bands, having lived and played through the formation, dissolution, and subsequent reunions of many of their peers. “I don’t understand why a band would make a big announcement about breaking up,” he says. “Why would you do that, unless you actually absolutely hate each other and think there’s no way you would ever get back together or hang out? It always seemed weird to me that Soundgarden made this big statement about breaking up. Obviously, they’re back together. It took them a while but, you know, in those situations, you could just take time off. There’s no need to unfurl a banner. You don’t know what’s going to happen in the future, right?

For now, the former road dogs have tentative plans to tour Europe in late May and early June, with the possibility of one-off shows in the States when their work schedules allow. But Vanishing Point, Arm says, was made with the stage in mind. “This is a record,” he explains. “In many ways our focus is live performance because that’s what we do more often than we record, but there are a lot of people whom we won’t get to play for, who might only be able to pick up the record. So if something serves a song in the studio, we might as well go for it. We’re not going to bring around a guy on tour to play clavinet or synthesizer on just one song. Now, if we only knew someone who could play both.”