“When I first started writing songs, I was doing a lot of folky stuff with the guitar, and my mom said, ‘Ugh, it’s so boring. Why don’t you rock it up a little bit? Make it rock’n’roll.'” That one conversation, says Marnie Stern, has shaped the way she’s approached songwriting for much of her decade-long career. At the moment, the manic, 36 year-old New York native is at home, preparing both for the March 19 release of her fourth studio full-length, The Chronicles of Marnia and a trip to visit her mother and ailing stepfather in South Florida. “Now,” she says of her songs, “I usually equate sparse and simple with boring. And even though it’s irrational and I know that’s not the case, it’s really difficult for me otherwise. But then I was thinking maybe, I should try to make things less nutso.”

“Nutso” is a good word for describing the pinballing guitar pointillism that’s defined much of Stern’s work up until now. While the self-taught NYU grad (and avid finger-tapper) has already secured a place for herself in nearly every major music publication’s “100 Greatest Guitarists” list, the dizzying nature of her guitar work has often come at the expense of her songs. “This time,” she says, “I was trying to focus on songwriting. Not guitar playing.” Though every bit as kinetic as its predecessors, the result is Stern’s most accessible and powerful effort to date.

Recorded over three weeks this past May in Brooklyn’s Rare Book Room Studio, The Chronicles Of Marnia marks the first time Stern has recorded without longtime drummer, engineer, collaborator and now one half of Death Grips, Zach Hill (Oneida’s Kid Millions steps in here to wonderfully restrained effect), as well as her first time working with a producer. “He kept trying to get me to sing the right notes,” Stern says of Rare Book Room’s Nicholas Vernhes. “There were arguments. I would argue with the guy and say, ‘I don’t want people to think I could really sing. I’m not a singer singer. I don’t know, I just sing in all kinds of different ways. But this guy was also like, ‘No you can’t have all of this on here, it’s cluttered. But, you know, if you want this to sound like your other stuff, go ahead, do what you want. I usually like to bury everything in a lot of noise and this is much cleaner. The tapping parts, to me, sound muted, the drum parts are subdued, and the voice is so…” She pauses and cocks her head. “Clear?”

But Chronicles, Stern says, also feels like something of a swan song as years of critical plaudits have yet to translate to long-term commercial stability. “There is a fear that constantly surrounds me,” she explains. “I’m just not going to be able to continue doing this. Or if I am, I’m not going to be able to continue releasing it. Because how do you do it anymore? There’s no money. If there are a trillion bands and I can’t get guarantees, how do I pay a band on tour? How do I release it if no one will release it? And if I release it myself, how will I pay for the recording? It just feels so out of my control now. A lot of the time, this felt like it might be my last record, so I’m just trying to appreciate the moment, trying to be there for everything that happens. Because everything feels so — eek. I don’t want it to be; I want to be able to do this forever.”

Between tours, though, Stern has raised money by giving guitar lessons in her Upper East Side apartment. “It’s the best thing I’ve ever done,” she says. “It’s so nice, because it’s more than just teaching guitar. It’s like being a life coach. I have a lot of girls who want to know, ‘How do I do it? How do I make it, in music and business? How do I deal with dudes?’ They’re all 18, 19, and that age is terrible, so I’m kind of like a shrink. And then I get so attached and then they play me their songs and then I get teary and I love it. I love it. The only thing is, I teach them my style of playing. The whole thing. It’s very…” she pauses and cocks her head again. “Specific.” 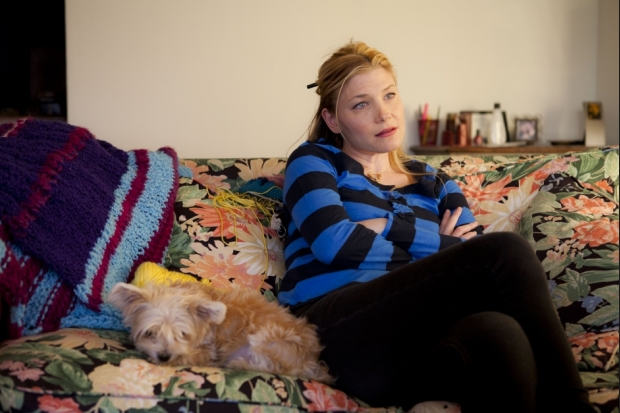 In The Studio, marnie stern