The received wisdom is that popular music is the province of short attention spans, which are only getting shorter: Listeners only care about callout hooks; albums are obsolete now that they’re purchased one song at a time and played on shuffle; and we’re all channel-surfing from YouTube video to YouTube video. As so often happens, the received wisdom was not exactly right.

If you’re going to listen to a lot of this year’s most critically acclaimed music, you’re not going to be able to do it in three-minute snippets — 2012 was a year of grand-scale songs and albums whose length was (mostly) a symptom of focused ambition rather than of lazy excess: Frank Ocean’s ten-minute channel ORANGE centerpiece “Pyramids,” Swans’ two-hour double-CD The Seer, and beyond. Scott Walker, Neil Young, and Godspeed You! Black Emperor all released songs that proudly crossed the 20-minute mark. One of the most celebrated jazz records of the year, Wadada Leo Smith’s Ten Freedom Summers, was a four-and-a-half-hour cycle spread over four discs.

Attention spans are, in fact, longer than they’re generally given credit for being. YouTube’s average view length per video has increased significantly over the past few years, and is now more than four minutes, or roughly the length of “Gangnam Style,” and book readership is at its highest point in decades. It’s also worth mentioning that pop songs are still, in general, incredibly short compared to a lot of other types of durational art. We think nothing of spending an hour and a half to watch a movie or a play, or an hour to watch a TV show, but eight minutes for a song is still kind of a commitment.

In part, that’s because the length of music is directly connected to what its reproduction medium can handle. When ten-inch, 78-RPM shellac records (or seven-inch, 45-RPM vinyl records) could fit about three minutes of music with comparatively decent sound quality, a typical song was about three minutes long, and that’s what our idea of “a song” has been like ever since. (Three minutes is also a conveniently brief unit for radio programmers trying to squeeze in as many ads as possible.) When an LP side could fit about 20 minutes of music, some particularly daring (or longwinded) musicians figured out what they could do in a third of an hour.

And now the media through which devoted music fans do a lot of their listening can, at least theoretically, handle a single performance longer than anyone could listen to. The Flaming Lips tested that idea late last year with “7 Skies H3,” their 24-hour song. It’s unlikely that anyone has listened to the entire thing in a single sitting, including the Lips themselves.

But that’s one of the Flaming Lips’ many experiments with duration. The best thing they released this year was their cover of “The First Time Ever I Saw Your Face,” with Erykah Badu singing. As originally written by folkie Ewan MacColl in the ’50s, it’s, you know, a song-length song. You can get through the whole thing in under three minutes without rushing. In 1969, Roberta Flack made “The First Time Ever I Saw Your Face” hers by slowing it way, way down; and her version was still under five-and-a-half minutes. Badu and the Lips spend ten minutes smearing “The First Time” into a beautiful slow-motion wobble, with the distorted crunch of time-stretched instruments overlaid with flickering, transient tones. Their version is a recollection of the sensation of a particular moment when time seemed to be suspended.

Time-suspension, actually, is the theme and/or effect of a lot of much-longer-than-typical songs. In dance music, the ten-minute-plus song traditionally means “I want this moment of joy in my body to last eternally.” (Think of the great long disco recordings: Donna Summer’s “Love to Love You Baby,” Cerrone’s “Love in C Minor,” Paperclip People’s “Throw,” Dinosaur’s “Kiss Me Again.”) In jazz and other improvisation-focused styles of music, it means “I’m feeling inspired and can find limitless depth in this piece.” (Only three of the 19 tracks on Wadada Leo Smith’s quadruple-disc set are under ten minutes.) In prog-rock, it means “I just bought a new keyboard, and I’m so high I could play it forever.” 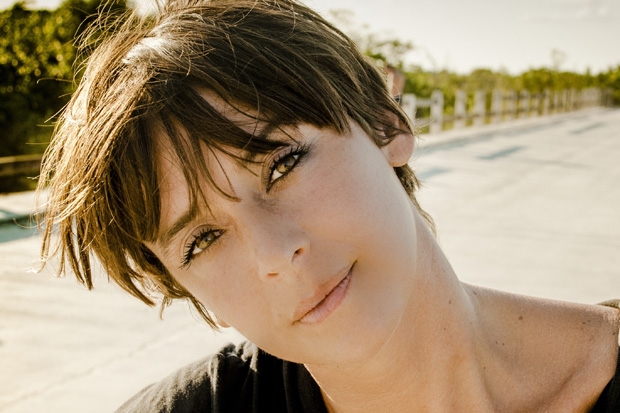 When a singer-songwriter goes on at enormous length, though, it means that we’re meant to notice that he or she has a lot to say. Cat Power’s 11-minute “Nothin’ But Time,” the climax of this year’s Sun, isn’t the longest song Chan Marshall has recorded — that was the 18-minute “Willie Deadwilder” — but it’s about enduring through time, in multiple ways. It’s addressed to someone who has more of her life ahead of her than Marshall does. It alludes to the form of the songs that Marshall wrote when she was much younger: the slow, dirge-y pieces that alternated between two chords until she ran out of lyrics. And its length makes a few crucial textural shifts surprising. After almost exactly six minutes and seven seconds — the duration of David Bowie’s “Heroes,” to which “Nothin’ But Time” bears a strong resemblance — Bowie’s old collaborator Iggy Pop abruptly starts singing along with Marshall. (When I interviewed her earlier this year, she noted that she’d tried to get Bowie to sing on it as well.) It fades out, then fades back in; it could go on forever, whether or not anyone is listening.

Hip-hop is a special case, since it evolved very quickly from a long performance form to a short recorded one. Hip-hop’s first recorded track, “Rapper’s Delight,” was almost 15 minutes long, and even that was an abbreviation of all-night park jams. Longer-than-a-pop-song hip-hop tracks are generally either somebody showing off their stamina as a stunt (like Too $hort’s nine-and-a-half-minute “Freaky Tales” in 1987; or Insane Clown Posse’s ridiculous hour-long variation on its theme released this year), or a lot of MCs each taking a turn at the mic. The most entertaining posse cut of this year was Odd Future’s ten-minute-plus “Oldie,” on which the lesser parts are part of the fun because they’re lesser — especially the appearance of “not even a rapper” Jasper Dolphin, which immediately precedes the very welcome return of Earl Sweatshirt. A runner-up: Maybach Music Group’s eight-and-a-half-minute “Power Circle,” whose climax is an epic Kendrick Lamar verse. 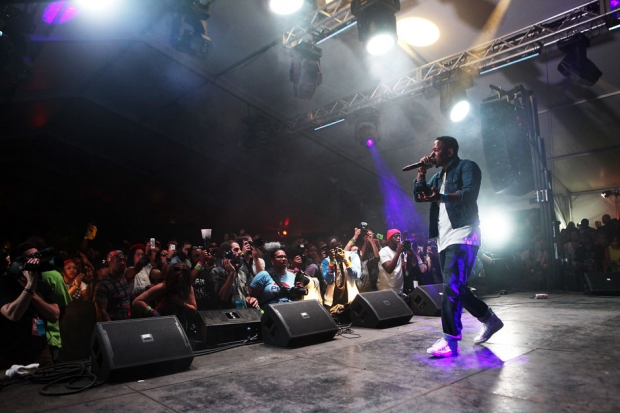 Kendrick also went long on good kid, m.A.A.d. city, one of the year’s most acclaimed albums. Making a 70-minute concept record was unusual but not unheard of; the 12-minute “Sing About Me, I’m Dying of Thirst” isn’t its best track, but is its masterstroke. It’s actually two songs (recorded with two different producers), plus a bit of audio verité in between and a scripted bit involving Maya Angelou at the end. Kendrick deliberately ran them together, though, which means that if you’re listening to one you’re listening to the other too. (Both halves are about timelessness, in different directions — the cycle of violence that’s gone on forever, and the hellfire that’s “proven to burn for eternity.”)

And speaking of eternal hellfire, another type of long song turned up in a few places this year — an apocalyptic approach to duration that drifted over from the guitar orchestras of Rhys Chatham and Glenn Branca (by way of Sonic Youth), in which layers of sound gradually accumulate for as long as either the medium or the musicians can handle it. The two 20-minute tracks on Godspeed You! Black Emperor’s ‘Allelujah! Don’t Bend! Ascend! are standard operating practice for them (both first appeared in Godspeed’s repertoire close to a decade ago). Fucked Up’s 15-minute “Year of the Tiger” is another post-Sonic Youth piece, and a demonstration that they’re willing to defy the “anti-orthodoxy” orthodoxies of hardcore punk by way of dynamics, counterpoint, backing vocals, and E Street Band-style piano riffs. The 20- or 30-minute songs on Swans’ The Seer make use of layered textures to attack and retreat and attack again; they’re as body-focused a rock band as exists, and The Seer makes its listeners respond not just to stress and release but to the anticipation of stress and release.

Duration as a sign of commitment or intensity or “I AM SRS ARTIST/THIS IS SRS MUSIC” isn’t a new phenomenon at all — but there seems to have been a lot more of it this year than in recent memory. One reason may be that these artists are signaling that they’re giving up on the idea of pop crossover, or at least on using radio and television as the quickest way to attract an audience. Compare the short and long versions of Gorillaz’ one-off collaboration with James Murphy and André 3000, “DoYaThing”: one is a four-and-a-half-minute pop song, the other is a 13-minute blowout on which Three Stacks screams “I’m the shit!” over and over until it’s funny, then unfunny, then hilarious again. The thrust of his guest appearance on Rick Ross’ eight-minute album track “Sixteen” was that sometimes a 16-bar cameo isn’t enough to say all you need to say. 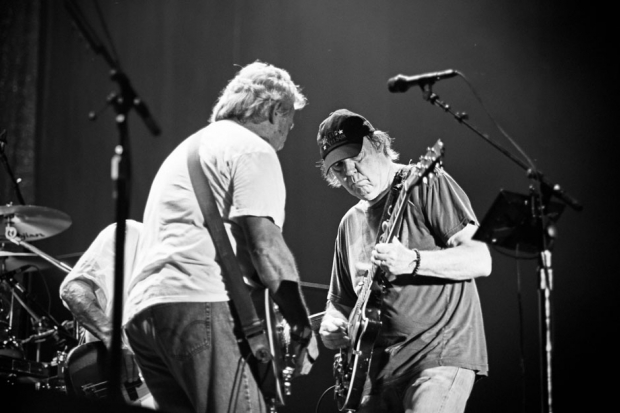 Bands who aren’t in the business of competing for the very few slots on commercial radio that aren’t already occupied by One Direction, bless their hearts, see no point in acting as if they are. Precision metal bands like Pallbearer and Neurosis have no incentive to trim their 11-minute songs down to three. Likewise, if you’re enough of a Neil Young fan in 2012 for a four-minute song, you’re enough of a Neil Young fan for a 27-minute song (the lurching “Driftin’ Back”).

Fandom, actually, is the heart of the long song’s compact between artist and listener, because devoting attention to something at length annihilates the very 2012, very Spotify-generation notions of choice and interactivity. Now that more music than ever imagined is at listeners’ fingertips and competing for attention, listening to anything means missing something else. If you’re paying attention to all of Frank Ocean’s “Pyramids,” you’re sacrificing the chance to hear, perhaps, three other songs. It shouldn’t be surprising how many of us still find that sacrifice worthwhile.