Afrika Bambaataa’s “Planet Rock,” the pioneering 1982 single that helped give birth to hip-hop and electro, was based on two Kraftwerk songs, but it didn’t technically sample either of them. Instead, Bambaataa and producer Arthur Baker recreated the synthesizer melody and drum-machine patterns themselves. “I tried to create what a DJ would do with records,” Baker told Bill Brewster and Frank Broughton for their great book The Record Players: The Story of Dance Music Told by History’s Greatest DJs. Baker also acknowledged they’d had to settle with Kraftwerk for “a lot of money.”

Ironically, then, although Kraftwerk’s music played a huge role in the birth of sampling, they’ve recently won a legal victory that could restrict other would-be sample-wielders to the “Planet Rock” approach: basically, sampling without sampling. As the German legal publication Juve reports, Germany’s highest court for non-constitutional legal matters has ruled in favor of Kraftwerk in a long-running case involving a sample of “Metal on Metal,” from the techno-pop trailblazers’ landmark 1977 album Trans-Europe Express. At dispute was a sample used in German rapper Sabrina Setlur’s 1997 single “Nur Mir” (“Only Me”) by producers Moses Pelham and Martin Haas.

After more than a decade of legal wrangling, the Federal Court of Justice of Germany reportedly found that a music producer can’t legally copy another artist’s recording to that extent that the producer has the ability and the equipment to make the same sounds herself. The judges determined that “Nur Mir” could’ve recreated Kraftwerk’s sounds, “Planet Rock”-style, in 1997, and that’s why Kraftwerk won the case.

Still, the ruling opens a whole new can of worms when it comes to sampling in Germany. The Economist, which somewhat confusingly refers to the court (Bundesgerichtshof in German) as “the German supreme court,” reports that the judges said the recreation of the sample would have to be good enough to satisfy the typical consumer. That creates something of a paradox, according to Udo Kornmeier, the attorney for the defense, who’s quoted as asking, “How can you be sure that the artist has succeeded before the work has been released to the consumer? 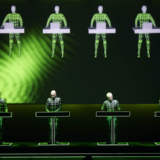 Kornmeier, who worries the ruling could have a chilling effect on sampling across media, including photo collages and written parodies, is reportedly considering appealing the case to the highest court in Germany, the Federal Constitutional Court. Kraftwerk remain influential, but their latest venture into the legal realm might not necessarily make “Planet Rock” the law of the land. As awesome as that sounds now that we say it.