If it seems too good to be true, it probably is, even when it involves Jack White and Lady Gaga. Earlier today, various publications pointed to an out-of-context quote from the U.K. website for Esquire magazine, in which White appeared to be slamming Gaga as artificial. In particular, British magazine NME‘s headline embellished on the quote, claiming White was specifically addressing Gaga’s “music.” Which, of course, would all have been a bit rich, considering White’s the guy who releases singles via hot air balloon, pretended his ex-wife White Stripes drummer was his sister, and famously favored a red, white, and black color scheme.

The problem, as you can probably guess by now, is that White says he wasn’t talking about Gaga’s music or its authenticity at all. (The full interview isn’t online.) He also slams the “tabloid” nature of media coverage surrounding artist beefs, saying it has a chilling effect on artists speaking to the press. He particularly singles out publications that effectively make up quotes. Finally, he praises Gaga for her work supporting gay rights.

I’d like to address the recent tabloidesque drama baiting by the press in regards to Lady Gaga. I never said anything about her music, or questioned the authenticity of her songs in any way. I was in a conversation about the drawbacks of image for the sake of image, and that it is popular nowadays to not question an image in front of you, but only to label it as “cool” or “weird” quickly and dispose of it. I don’t like my comments about lady gaga’s presentation being changed into some sort of negative critique of her music. If you’re going to try to cause drama, at least get the quotes right. I think journalists should also be held accountable for what they say. Especially publications like the NME who put whatever words they feel like between two quotation marks and play it off as a quote. Maybe somebody with more lawyers can take them to task, but i’ll just use the Internet and Twitter instead. I also think that kind of tabloid drama encourages artists to not express their opinions in the press, and instead give polite soundbites that don’t stimulate thought about creativity and the consumption of art in its many guises. 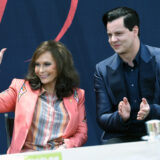 Peace to Lady Gaga and I fully congratulate and compliment her on her championing of gay rights issues and the momentum it’s given to help create change.

And here’s the Esquire quote in question:

I don’t think she [Gaga] lives it because it’s all artifice … It’s all image with no meaning behind it. You can’t sink your teeth into it. It’s a sound bite. It’s very of this age, because that’s what people want.