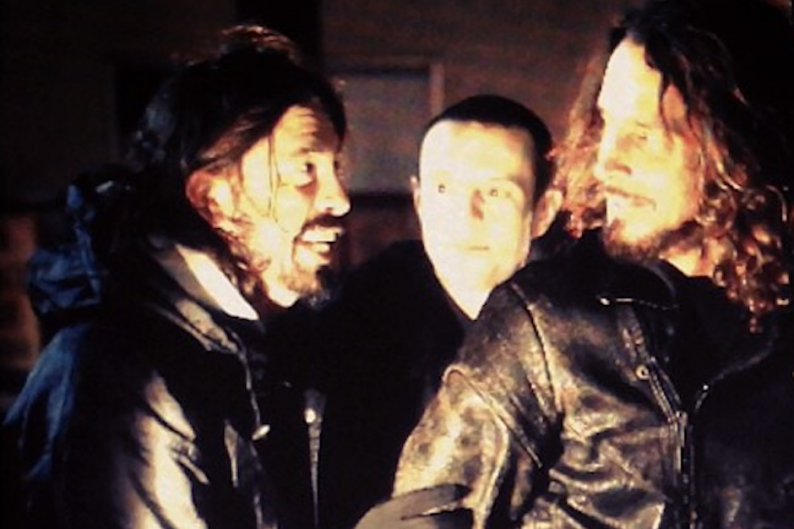 Over the weekend, Deadmau5 proposed to girlfriend Kat Von D the new-fangled way: on Twitter. Von D, a tattoo artist you might recognize from such reality TV shows as Miami Ink, accepted the proposal in kind. More recently, the happy couple made their way to the set of the music video Dave Grohl is directing for Soundgarden’s “By Crooked Steps.” Because this whole strange paragraph? These are all things that happen now, every one of ‘em.

Deadmau5 will play a cop in the video, according to Von D, who tweeted at least three different photos from the shoot, including one where Officer Joel Zimmerman acts like he’s handcuffing Chris Cornell. Von D wrote: “Had weirdest dream last nite where we’re in the Valley for some reason.. Joel was a cop n then he arrested C …but then Dave Grohl showed up on a Segway and everyone laughed.” Again, these things happen! Segways!

Speaking of segues, now might also be a good time to point out that, according to Soundgarden guitarist Kim Thayil, the band has no more finished material left in the can from reunion album King Animal. “Everything on King Animal is what we completed,” he told Hails & Horns in a lengthy Q&A. “There were lots of other ideas, more ideas to do another original album, but they weren’t completed.” But he also said that although it’s impossible to say with complete certainty, Soundgarden will remain together “for the foreseeable future,” adding, “It’s always going if it’s going.” Also noteworthy: Unlike Van Halen for last year’s A Different Kind of Truth, Soundgarden didn’t rework any old demos for their new album. It’s all new new.

As for Grohl, of course, the Sons of Anarchy-style biker video for King Animal’s “By Crooked Steps” is only one project of many these days. The Foo Fighters frontman also drummed for the next Queens of the Stone Age album, reunited the living members of Nirvana to play behind Paul McCartney, and has been doing his best to remind us about his Sundance-bound feature-length directoral debut, the Sound City documentary. He even appears in Bob Mould’s Kickstarter-fundable concert movie.

Can we all now begin counting down until Deadmau5 remixes McCartney-Nirvana rocker “Cut Me Some Slack”? Or should we cut ‘mau5 some slack? After all, this particular boy in blue has a wedding to plan.