BUKU Music + Art Project, the New Orleans fest that marries indie rock, EDM, and hip-hop with art installations and a smorgasbord of local cuisine, has confirmed it’s returning on March 8 and 9, 2013. SPIN is pleased to announce the lineup for the second annual event, which is led by Kendrick Lamar (who turned out one of our favorite albums of 2012), Calvin Harris, Kid Cudi, Best Coast, Passion Pit, and Primus 3D.

BUKU will again take place very near the French Quarter, at Mardi Gras World, which is one of the leading Mardi Gras float production houses.

Tickets go on sale December 7 at 11 a.m. CST. And here’s a special offer: the first 50 SPIN readers to use the ticket code TOOBUKUFORSPIN beginning on Friday at 11 a.m. CST/noon EST will receive 10 percent off!

A VIP package is also available, granting access to the Creole Queen Riverboat which will be docked on the Mississippi River alongside the BUKU grounds all weekend. VIP ticket holders also get open bar; easy access to all stages, exclusive performances and bars; and a viewing area of the main stage from the Creole Queen’s deck. 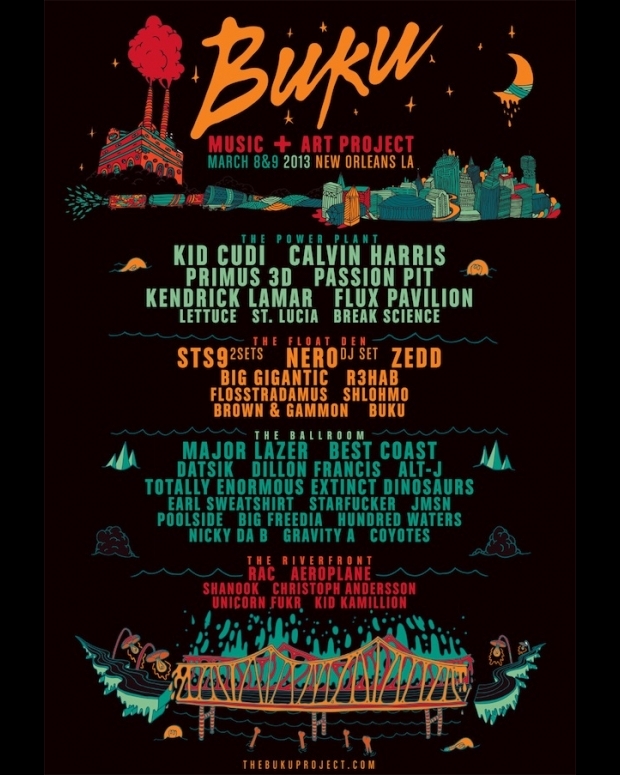