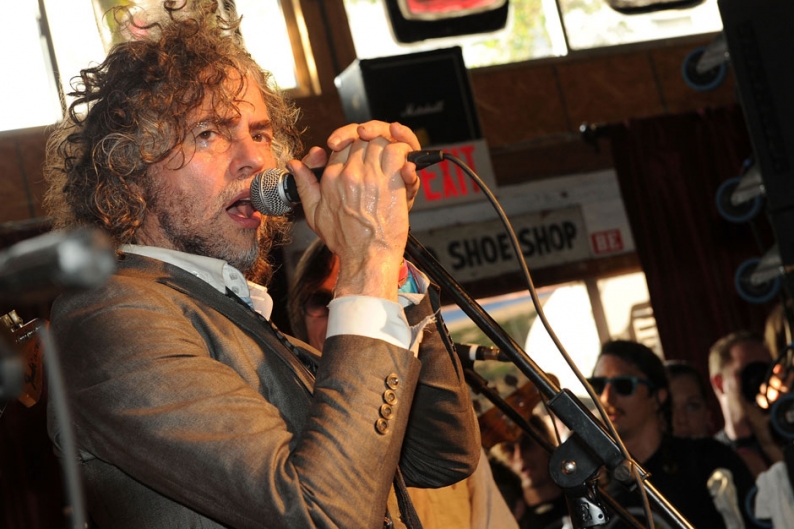 Wayne Coyne, frontman for Oklahoma City oddballs the Flaming Lips, has a reputation for unusual behavior — dude sold the blood of his collaborators and will soon star in a radio broadcast about a fictional head-shaped tumor on his leg. So Coyne didn’t turn many heads when he sent out a tweet earlier this month that read, “Sorry Sorry Sorry!! Everyone that was inconvenienced because of my grenade at OKC airport!!” Well, turns out the singer did in fact force the Transportation Security Administration to “lock down” Oklahoma City’s Will Rogers World Airport on November 10 because he was carrying a grenade.

Oklahoma-based blog The Lost Ogle posted a first-hand account of a traveler who missed a flight and was forced to cough up $1,000 for new plane tickets because of the security scare. “All we could see was Wayne standing by the security checkpoint with a bunch of agents around his bag,” the traveler said. “I was stuck near the food court, wasn’t able to cross the airport to get to my gate. Flight left without me, all because of Wayne Coyne.”

Coyne, who normally wields a confetti-cannon, explained the incident to Pitchfork: “The truth is unfortunately boring,” he said. The night before the flight, the Lips attended a house party where Coyne found a “non-explodable” hand grenade, which he took as a keepsake. “It was an actual grenade that was now missing its explosive parts and painted gold,” the singer explained. “I just threw this gold grenade in my bag and had not quite thought about it.”

The next day, airport security spotted the (allegedly) harmless weapon on X-ray machines and TSA agents rifled through Coyne’s belongings because, you know, he had a hand grenade in his bag. “They all believed it was just a dumb accident,” Coyne claimed, but “bureaucracy” got in the way. “The bomb squad guy came out, and once he comes out, there’s two weeks of paperwork that has to be filled out. Everybody could immediately tell what it was. But it’s too late — the merry-go-round had to go its whole way around before you could get off.”

The Embryonic leader described the airport officials as “very nice,” and admitted some fault, but Coyne wouldn’t accept full responsibility for inconveniencing his fellow travelers (even though he did tweet that apology the same day as this mishap). “I would agree that it was stupid of me, but I don’t feel wholly responsible if people missed their flights,” he said. “I’m not making the rules. It’s not illegal for me to have that grenade with me.”

That’s not enough for the $1,000-short commuter quoted on The Lost Ogle, who said, “I think Wayne Coyne should reimburse me, at a minimum I want to drop acid with him and Yoko Ono.” Coyne responded to that request, saying, “That sounds like fun. I can’t speak for Yoko, but I would say yes, let’s do that.”

Since the story broke Tuesday (November 20), Coyne has retweeted several attacks leveled at him via the social network, including “No one ‘forgets’ they have a grenade.. This is nothing but a selfish idiotic publicity stunt.. Let’s hope he does time..” and “I’m less bothered by your aiport grenade, than I am about the fact that you are 51 and dress like a crazy asshole everyday.” The exchange prompted one Twitter user to write, “@waynecoyne is retweeting complaints about himself. ego trip or genius?”