"We're going to still sound like TLC, evolving to whatever level we need to be at this time" ... with holograms 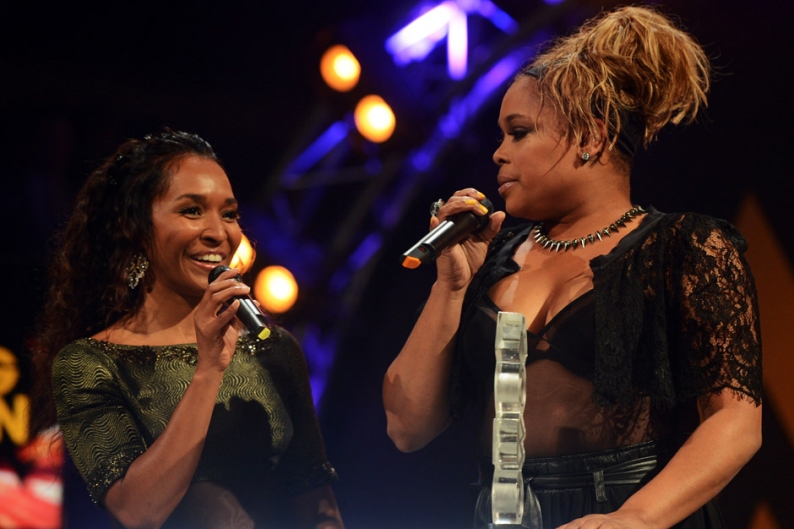 After divorce, bankruptcy, and ill-conceived reality shows, TLC’s surviving members, Tionne “T-Boz” Watkins and Rozonda “Chilli” Thomas, will finally release a new album and embark on a tour that may involve a resurrection of late third member, Lisa “Left Eye” Lopes. Speaking at the 2012 MOBO Awards in Liverpool, England on November 3, the duo confirmed they will soon start work on a follow-up to the R&B group’s last LP, 2002’s 3D.

“We’re going to still sound like TLC, evolving to whatever level we need to be at this time,” T-Boz said to the BBC. When asked how TLC would fit into a pop scene they’ve been absent from for a decade, T-Boz added, “We’ve always grown throughout the years and have always had our own sound. That’s what works for us and we don’t have to worry about anybody else.” She continued, “When that stops working, maybe we’ll hang up the towel, but that still works. We have to get into the studio and start feeling how we feel. You have to find yourself first and then you find the path and then you have an album before you know it.”

Left Eye, who died in a grisly car accident in 2002 in Honduras six months before the trio released their fourth album, may be brought back to life on stage as a hologram. Chilli revealed: “The hologram is something we talked about and thought about years ago, obviously timing is everything but we’re definitely talking about it,” Chilli told Metro. “It will be hard on us but I certainly think our fans would love to see it.” She added, “We would definitely be the first group to ever do it.” Apparently, Chilli missed the Tupac hologram at Coachella this April, put on by the now-bankrupt company Digital Domain Media Group.

“I think we would probably pass out and all of our fans would break down, but it’s amazing how real the hologram looks, it’s almost like you can touch the person,” Chilli said. “It’s great but spooky at the same time, but we’re definitely thinking about it.”

The two remaining members of TLC also said they’ll soon be working on their own VH1 biopic, which they will cast and executive produce. “We are so honored to have the opportunity to tell our story and let people see our journey,” Chilli said. How that project will differ from TLC’s 1999 episode of Behind the Music — besides as an obvious promotion vehicle for the new album and tour — remains to be seen.