Radiohead singer takes a backseat to Flea on 'Default' B-side 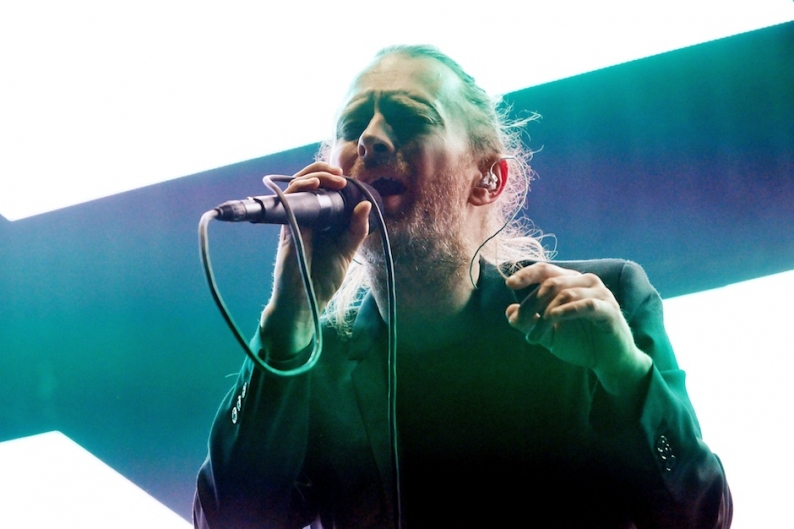 In September, Thom Yorke debuted “Default,” the first single from his Atoms for Peace project featuring Red Hot Chili Peppers’ Flea and Radiohead’s longtime producer Nigel Godrich. The track was released immediately to iTunes, and a 12″ vinyl release with B-side “What the Eyeballs Did” was scheduled for November 19. That’s 18 days from now, but XFM’s Mary Anne Hobbs in London got her hands on the B-side and premiered the cut yesterday on Halloween.

While “Default” didn’t stray that far from Yorke’s solo work on The Eraser — even the single’s artwork is similar that 2006 LP — “What the Eyeballs Did” sounds more like what we expected from the Atoms for Peace project: Flea’s pulverizing bassline gives the song its backbone, there’s a complex backbeat composed by AFP’s drummer Joey Waronker and percussionist Mauro Refosco, and producer Nigel Godrich adds his trademark flourishes in the form of swirling synths and a spacey ambience. And then there are Yorke’s vocals, in their most beguiling and incomprehensible form, holding it all together.

Atoms for Peace’s full-length will arrive at some point in the first half of 2013. While album title and other details have not been announced, the album’s track list has likely been revealed — albeit alphabetically — thanks to a listing of new Yorke-penned songs that popped up on his publisher’s Warner Chappell site. “Default” and “What the Eyeballs Did” both show up, as does “Stuck Together Pieces,” which was remixed and used for a single on Modeselektor’s 50 Weapons imprint this past summer, and “Judge, Jury and Executioner,” a song that featured prominently during Atoms for Peace’s brief 2010 tour.