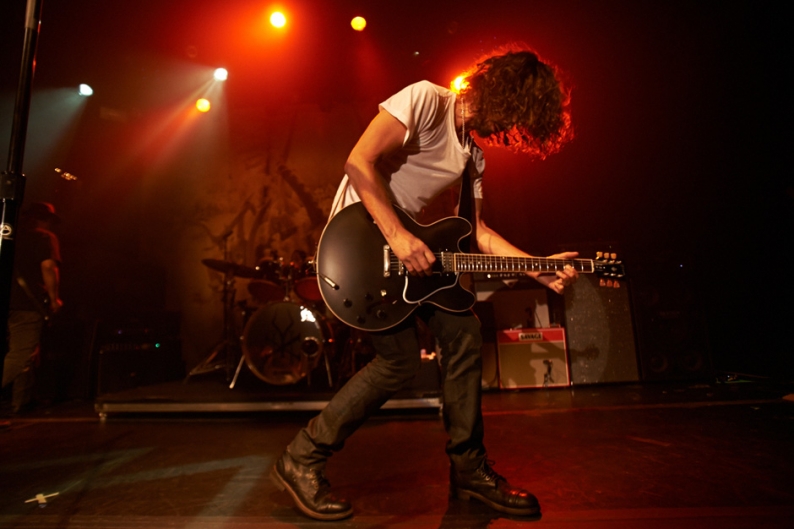 To celebrate the end of the torturous 6,020-day wait between Soundgarden releases, the onetime Seattle-based alterna-metal-punk-grunge-whatever quartet played a record-release show at New York City’s Irving Plaza last night. The Mesozoic wait didn’t matter much, though, at least not to the 1,000 or so fans who were lucky enough to acquire tickets to the show (or were blessed enough to have $150 to satiate the scalpers outside— where’s Mike Damone when you need him?). Many of the concertgoers were singing along to every word of Soundgarden’s just-released King Animal. Throughout the night, superfan Taylor Hawkins of Foo Fighters, who watched the show from behind the mixing desk, kept a bestial beat, drumming one arm on the other. And one fan had even printed out the title of the new track “Blood on the Valley Floor” on a piece of paper and held it up for frontman Chris Cornell to spot from 50 feet away— and he would when he eventually assumed the stage at 9:08, another two-hour wait after doors opened.

When Soundgarden eventually let loose their roaring rumble of overdriven guitars, drubbed drums and yowled vocals, it was like a beatific vision of all the things that made them great — the heavy churn of guitars, the soaring vocals — the things that made them Soundgarden. Of course, it didn’t hurt that they opened with the lasciviously groovy “Incessant Mace,” a track off their primal and, lest we forget, Grammy-nominated 1988 SST debut Ultramega OK. And then they wielded two of their historically heaviest songs, “Gun” and “Jesus Christ Pose.” Cornell even assumed the titular stance of the latter track midway through, as if to remind us of the sacrifices he endured (uh, Scream) to come back to this point.

Throughout the night, the band took artful breaks to tweak their instruments into mangled, Francis Bacon-like approximations of guitar tunings — a habit they picked up around the same time as their onetime SST labelmates Sonic Youth. And between the girth of the guitar and the mosh pits and a few instances of crowd-surfing that broke out early on — and that’s not to overlook Cornell’s Sinatra-like mic stances and his classic low-hung guitar pose — it looked exactly like the Soundgarden concerts of legend. The main difference being that guitarist Kim Thayil was wearing a Neurosis shirt instead of one repping Tool or C.O.C. (And nobody wore flannel, at least on stage.)

Before playing Badmotorfinger’s “Room a Thousand Years Wide,” the singer told the audience about how a few years ago the band discussed how to “reconnect with you,” so that the fans could “get in contact with us if you wanted” or “to be able to buy a Soundgarden T-shirt if you wanted,” and then he thanked the audience for the opportunity to record the new LP. After all, nostalgia aside, Cornell made no bones about the night being the King Animal release show, and the band played nine of its 13 tracks over the course of the two-plus-hour set. Highlights among them included the bluesy, stuttering “Rowing,” the avant-guitarred “Worse Dreams” (during which Cornell picked out squeaky noises behind his instrument’s bridge), and the drum-and-bass-heavy fan-requested “Blood on the Valley Floor,” a song the band made dude wait for ’til near the end. The fact that they have a song on the new album that proclaims that they’ve “Been Away Too Long” shows their current state of alertness.

Nearly three decades after forming in Washington State’s Emerald City, they’re still wizards of buzz — something they proved at the end of their first encore (before they returned to play “Rusty Cage,” and after Cornell changed out of his sweated-through white shirt). But it was the moment that they finished up the Badmotorfinger rager “Slaves and Bulldozers” that everything seemed to come into focus, as Cornell, Thayil, and bassist Ben Shepherd let their instruments ring out in a SunnO)))-like drone, feeding back at deafening decibels as they tweaked their guitar pedals for optimum noise. And the audience ate it up, screaming for more even after minute-upon-minute of metallic, grungy noise. When they did leave the stage, all Cornell could say was “Thank you” a few times and “Right on.” As the clock neared midnight, one thing was sure: Soundgarden may have moved forward, but they have not let go of the past. At least not on their own animalistic terms.

Kory Grow
Tags: Soundgarden, We Were There