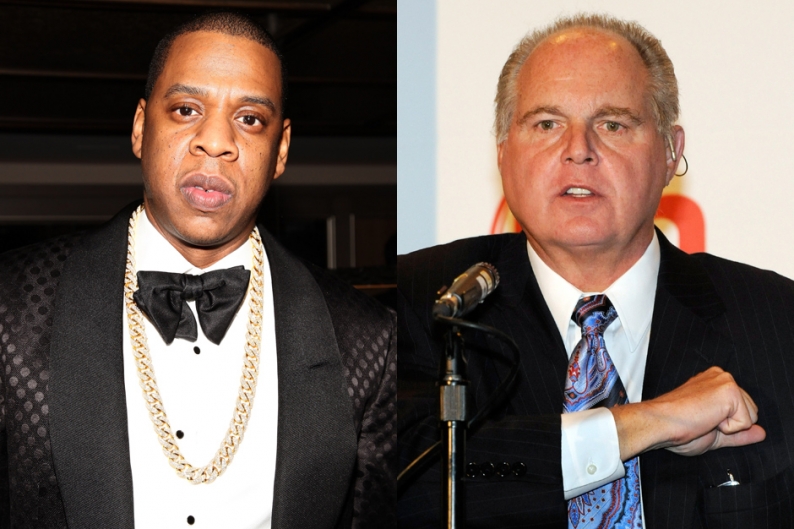 Word to Hova: Noted slut-shamer Rush Limbaugh is calling out the inherent misogyny in “99 Problems.” Jay-Z performed his enduring 2004 hit at a campaign event for President Barack Obama on Monday (November 5), but with a catch: Where the chorus usually identifies a “bitch” as the one problem Jigga Man doesn’t have, he subbed in “Mitt,” and in one fell swoop managed to both call the Republican candidate a lady-dog and prophetically suggest that the presiding POTUS needn’t worry himself with Romney.

The conservative radio host, who has never himself implied negative things about anyone, has taken issue with this. On his eponymous broadcast, Limbaugh described Shawn Carter’s association with the president: “Jay-Z, a noted rap figure in American pop culture, a noted Obama bundler and fundraiser and supporter, performed live with Obama … Now remember it is Obama and the Democrats who claim … the Republicans [are] conducting a war on women. So here’s Mr. Z — who, I think, the most often used word[s] in his lyrics [are] ‘hoes’ and ‘bitches’ — performing for the President of the United States.”

He went on to play the clip, and then went on to kinda-sorta rap the lyrics himself, which really is worth a listen (below, thanks to BuzzFeed). Of course, this noted pioneer for women’s rights does have an iota of a point as to how appropriate it is to pair the POTUS with the words “gat” and “hoes” — Obama has distanced himself from the offending song in the past. During a recent radio interview, the president said he prefers Jay-Z’s “My First Song” to “99 Problems,” because it reminds him to “always stay hungry.” You gotta get that dirt off your shoulder, Bo.