Shut Up and Fly: Day One on Rihanna’s Insane 777 Tour

Rihanna has launched her 777 Tour, towing 250 press and fans along with her band and crew on a chartered plane around the world, performing seven shows in seven countries in seven days, all in the name of promoting her November 19 album Unapologetic. Does that sound as insane as it sounds fun? It totally is. Here are SPIN’s impressions from the first leg of the Rihanna party junket, as we traveled from Los Angeles to Mexico City to Toronto.

1. Rihanna is actually on this plane.
Despite last-minute skepticism that she would deign to ride on the same convoy as us commoners — overheard: “she’s probably in a private plane that will ride alongside us” — Rihanna is, in fact, on the #rihannaplane. After a long wait, she snuck up on us wearing a black bodycon tank dress and greeted everyone up and down the aisle. The swarm of journalists immediately went into paparazzi mode, murking out non-giant-camera-wielding bystanders, but when she made her way to the back fourth of the Delta 777, where the Navy is seated, the thing filled with shrieks and screams.

2. Rihanna smells otherworldly.
Because everyone seems to want to know what Rihanna smells like, it is confirmed: she smells like the rarest magical flower from an enchanted rainforest on a planet where all the light is iridescent. Celebrityfragranceguide.com says that she favors Escada’s Moon Sparkle, but it’s definitely a ruse. No one else on earth smells like Rihanna. There’s like, Greek tragedies that divined her scent from the past.

4. She really wanted to get us drunk.
On the first leg of the plane, after greeting its inhabitants (’cause that’s what we are, living on this thing for a week), she hopped on the overhead PA. “Are you ready for Mexico? Are you ready for tequiiiiiiila? Sit down, buckle your seat belts, and let’s get drunk!” It is 1 p.m.

5. It worked.
Once we hit 30,000 feet, RiRi and longtime personal assistant Jennifer Rosales brought the hospitality, pouring endless bottles of Armand de Brignac champagne ($212 each) and Courvoisier into plastic cups for all 250 press and fans. At first it was civilized, a reasonable inch-wide pour for everyone, but by the time they circled back and came up the other aisle, Rihanna was pouring Courvoisier into the mouth of an unidentified male journalist, totally game to get this fratty dude wasted. For the record, didn’t see that guy for the rest of the trip. 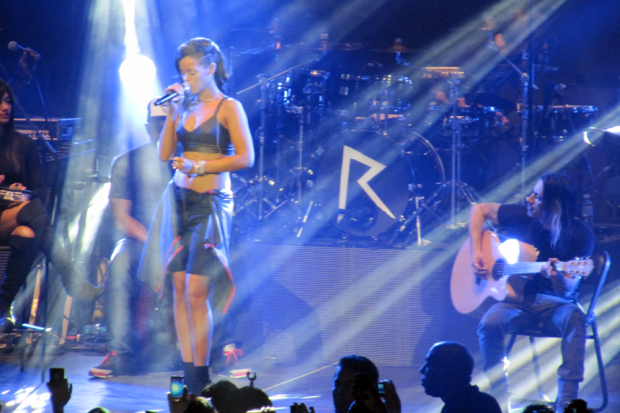 6. Rihanna’s filming the trip for a documentary.
There are 2928202 paparazzi-style cams rolling at nearly all times (seriously — when I woke up drooling at 8 a.m. on the plane from Mexico City to Toronto, there were two camera dudes walking up and down the aisle, getting very boring B-roll). But Rihanna’s doing her own taping, and will have the better end creation, just a hunch. Posted in various places across the plane were notices that we were being filmed. They identified the plane as a “venue.”

7. Which was not really so wrong.
RiRi hasn’t let loose a cappella on the overhead yet, but once the entire plane was wasted (we were also being served normal booze from the flight attendants), someone hooked up a series of subwoofers and began blasting her new album, Unapologetic. Short review: hey, it’s pretty good! Disclaimer: I wasn’t drunk, but might have been contact drunk.

8. Chaos ensued.
The ride from Los Angeles to Mexico City is about four hours, leaving many open minutes for inebriate fuckery. Have you ever been on a plane in which nearly everyone on it was up out of their seats, roaming around the aisles, making new friends, tripping over each other, etc? Yeah. At some point, two consecutive party fouls occurred in the form of overturned food trays and I felt deep shame empathy. My nice new friend Justin (hey Justin!) goes, “That’s that brown liquor talking.”

9. There may be 777 tour babies nine months from now.
PURE SPECULATION, but the Navy was grinding on each other to Unapologetic, just saying.

10. Once we landed, the Mexico City show was great.
The gigs are booked at relatively small venues for RiRi — the Plaza Condesa in DF was about 2000 capacity — extending the intimacy factor she seems to be trying to create by the whole 777 deal. After a long set by LA-via-Milan DJ Congorock, who’s opening on the whole leg, she took the stage and ran through nearly all her hits, including “Diamonds,” with the only other song from Unapologetic being “Fresh Off the Runway.” It was a surprise, but awesome. Who doesn’t want to hear “Umbrella”? The show had a vaguely casual vibe, too — she did all her signature dances, from the badgyal butterfly to the shooty-guns thing, and the band was tight but they all seemed to be figuring it out a bit, especially when, maybe? she forgot a few words to her new songs. (Either that or the natural low alto wasn’t ready a couple times to sing the high parts at that moment.) DF loved her, the Navy is fealty, women were selling bootleg merch outside the show afterwords, and the 777ers got on a red-eye to Toronto.

Next up, presupposing our continued sanity and/or survival: Toronto, Stockholm, Berlin, Paris, London, New York. We’ll be back.