In the late 2000s, The Guardian reported that it was used to torture prisoners at Guantanamo. How did you react to that?
Morello: We sued the State Department. As a band whose ideology stands 180 degrees on the other side of the fence from using music for torture, it was very hurtful that a song that was written about liberation of body and spirit to be used as a Medieval flogging device. Our suit against the State Department was unsuccessful. It never made it up through the channels. My hope is that one day when the real war criminals who perpetrated the illegal and immoral incursions into Iraq and Afghanistan, when they stand trial in their orange jumpsuits and black hoods in Guantanamo, then they can crank Rage Against the Machine 24 hours a day. “Killing in the Name” would be a good jam.

The song has shown up on a few TV shows, but is there anything that stands out?
Morello: No. I’m ready to sue. It’s certainly never been approved for a TV show. I’d like a list, please.

Were you aware of the Infectious Grooves song that was a reaction to “Killing in the Name”?
Morello: No.

How did the The X Factor Facebook campaign come together?
Jon Morter, co-organizer, “Killing in the Name” Christmas campaign: The U.K. had changed the rules on what songs could chart. They announced that any download, in theory, could be a single. The year before I did a campaign to get Rick Astley’s “Never Gonna Give You Up” to chart, purely as a joke. A year later, we thought, let’s do it again, but this time it would be serious. Every single year The X-Factor was getting the No. 1 single. It was getting tiresome for a lot of people. I’m a big fan, and I thought the song “Killing in the Name” would be the antithesis of anything The X-Factor would put out.

What did you think of it?
Morello: On one hand, it’s a fun, flippant thing to give the finger to commercial pop music being rammed down a country’s throat, but on the other hand, it shows that there’s a David for every Goliath. People working together in solidarity and finding inspiration in, at the time, a 17-year-old song, did the unthinkable and the impossible. And they toppled the X-Factor monolith and it was awesome. It was really one of the highlights of the entire Rage experience for me personally.

You played a concert to celebrate in London’s Finsbury park in 2010, which is available in one edition of the XX reissue. What did that show mean to you?
Morello: It was really one of the best shows Rage Against the Machine ever played. It’s certainly one of the wildest crowds that ever stood at a rock show. It was about them. I hate to even describe them as fans; it was, like, the people rose up and decided that the bullshit that was being handed to them, they weren’t going to take it. They were going to make another choice. When we played, we had all these quotes that were pulled on the screens from leading up to with where Simon Cowell guarantees victory, and all these betting booking agents — they treat it like the Kentucky Derby there. People wager on what’s going to be the Christmas No. 1. And they’re sort of guaranteeing that X-Factor‘s going to win, and these people did it themselves. It was pretty astounding. We invited Simon Cowell to MC the show but we never heard from him. We were just proud and honored to be the subject of that musical uprising. 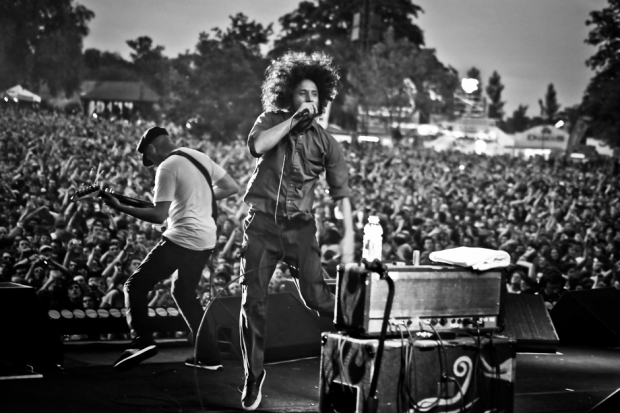 What was the reaction like when you played “Killing in the Name”?
Morello: What do you imagine? [Laughs] People seemed to enjoy it. [Laughs]

Morter: To me, personally, when they were playing that song to a crowd of people, where if it weren’t for us guys, it wouldn’t have happened, it was absolutely insane. When it was done, Rage decided they would give 100 percent of the profits to Shelter, the charity we were working with, as well. They didn’t have to do that. We didn’t ask them to donate their song. We felt quite humbled about it ourselves.

Since this is the song you’ve played probably more than any other, how does it fit into a set list?
Morello: A show could go well, it could go poorly, but if you play this one at the end, you just can’t lose. [Laughs] It is such a beautiful sight when that last refrain kicks in and, whether it’s from the early days when it was at a small venue or whether it was in the biggest stadiums and festivals, you could just see people jumping.