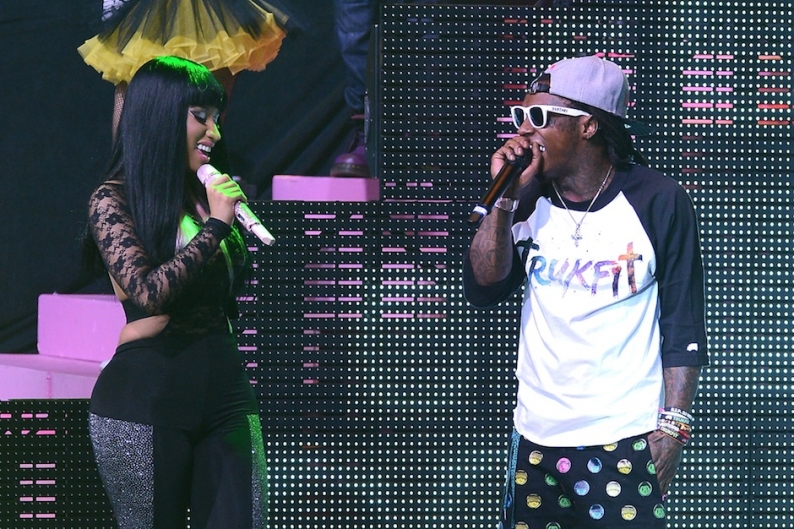 “Nicki, pop? / Only thing that’s pop is my endorsement op,” Nicki Minaj boasts on a recent Lil Wayne collaboration, “Roman Reloaded,” the closest thing to a title track from this year’s Pink Friday: Roman Reloaded. Where another current mega-seller, Taylor Swift, juggles her pop reality with anxieties about indie snobs on her own new album, Red (in reality, Swift’s earnest storytelling style has more to do with apparent influence Matt Nathanson than with either Katy Perry or Bon Iver), for Minaj the divide has always come down to mixtape Nicki versus radio Nicki. She has promised more of the former on her November 19 release, ahem, Pink Friday: Roman Reloaded — The Re-Up. “It’s all rap,” she told an interviewer.

“High School,” another Wayne collaboration and one of five new songs from The Re-Up, might slightly confound people expecting a return to, say, Weezy-featuring “I Get Crazy,” from Minaj’s reputation-solidifying 2009 Beam Me Up, Scotty mixtape. That was a hard-charging, word-drunk rap song, Lil Tunechi’s misguided guitar fetish notwithstanding. “High School” is a mish-mash: a muscular, richly detailed verse from Nicki leads into typically sleepy latter-day Wayne sex talk, with a syrupy synth-pop chorus sung by Nicki. “Hey, hey,” a choir of bros chants.

It’s like if Swift vowed she was teaming up with a Glasgow indie dude, and the result was a drippy piano ballad with the guy from Snow Patrol — okay, that actually happened, too. The point is, Nicki’s endorsement pop might not be the only thing about her that’s pop, but that’s fine; she doesn’t need to be embarrassed about being catchy (Taylor doesn’t, either). She just needs more songs as great as “Super Bass.” As an aside, her hypercolor Cassie team-up “The Boys” has promise, mixtape Nicki and radio Nicki all in one, plus Diddy’s favorite R&B siren. Forget high school.