The revolution will not be neuter-ized 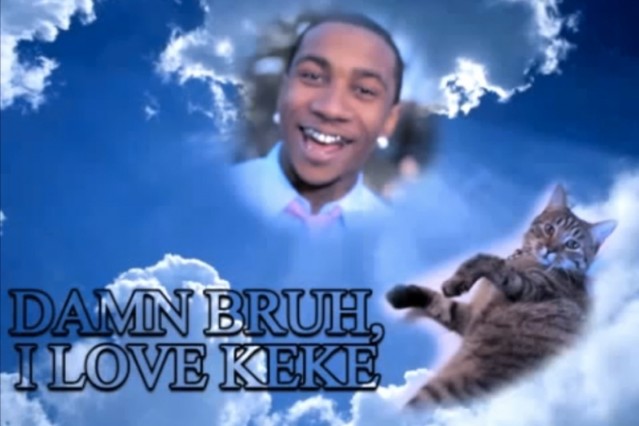 Were Sun Tzu alive today, we’re pretty sure he’d thank the Based God for building a career around the element of surprise. Berkeley’s Lil B has dropped a brand new single, in his way, and it’s a red-hot collab with KeKe the Adopted Tabby Cat. Now, we know better than most that rap names have gotten weird over the last couple of years, so you’d be forgiven for guessing that KeKe is a tertiary member of Odd Future. Forgiven, but still wrong.

Though we cannot vouch for the nature of her exact pedigree, it’s quite clear that KeKe is an actual cat. The track itself, produced by Lil B, is an electro-noise loop whose Public Enemy-like dissonance is calmed by the, um, vocal performances recorded over it: Lil B talking sweetly to his feline friend, and KeKe coming in hard with some serious purr. Here’s an example. Lil B: “KeKe, say something.” KeKe: “Purrrrrrr.” Lil B: “Good kitty.” Instant classic.

We’re pretty sure this is as close as one can come to featuring the Internet (not the Odd Future group, dammit) on your rap song. Here’s Lil B himself, introducing the track via Tumblr:

“OK THIS IS AMAZING JUST SEEN IT IN KEKE THE ADOPTED TABBY CATS FACE THAT SHES READY TO GO AND DROP HER FIRST! SONG RECORDING IN THE STUDIO EVER!! SHES HAPPY SHES MAKING HISTORY WITH LIL B!! AS THE FIRST ANIMAL EVER TO RECORD A HIP HOP SONG!! AND HAVE IT PRODUCED BY LIL B!!! THIS IS SOO EXCITING IMA TALK TO HER !! THE SONG SHOULD DROP TONIGHT!!!! OMGG!!! ANIMALS!!! UNITE!!”

His enthusiasm is warranted — Lil B could be kicking off a revolution. If dogs start rapping, DMX and Baja Men are screwed. Also, Birdman better watch his tail feathers.