Over the past 12 months, Ke$ha’s rep has undergone a bit of a makeover. The pop star known for shooting glitter from every oriface of her body (her words!) and cavorting with giant dancing phalluses was wiggling onto indie-rock blogs, seen swapping blood vials with Wayne Coyne, covering Bob Dylan songs, and recording with a (shirtless, of course) Iggy Pop. But some fundamentals have definitely not changed: “Guitar is the balls of the music,” she happily proclaimed while chatting with SPIN about her new album Warrior (due December 4 via RCA) and book, My Crazy Beautiful Life (out now!).

You’ve been working on this album for a long time. Did you enjoy watching all the weird rumors about who was on it and what it’d sound like evolve?
I literally live on a different planet. I don’t go online and I don’t watch television. I use my phone purely for phone calling people and Twittering. I’ve just been in promo and planning my shows, and outer space. So I don’t really know what rumors you’re talking about but I’m sure there were plenty floating around.

Well, here’s one that came true: two/fifths of the Strokes are on your record! (Julian Casablancas and Fabrizio Moretti play on “Only Wanna Dance With You.”) How’d that happen?
Yeah! I know! That’s a good question. They just were down, and I was down. A friend of mine plays with Julian and we kind of knew each other, and Julian really likes Dr. Luke so they were talking, and it kind of happened oddly organically and in a strange way. I’m a huge fan of their music, and they’re on one of my favorite songs on the record. They’re part of a long list of some of my favorite bands that have actually collaborated with me on this record. It’s really exciting for me to work with people that are unexpected. I hope people freak out. I kind of freaked out when he was like, “Sure.” I was like, “Really?!”

What about the Black Keys’ Patrick Carney?
Patrick’s actually a really good friend of mine. I just went to his wedding a couple of weeks ago. 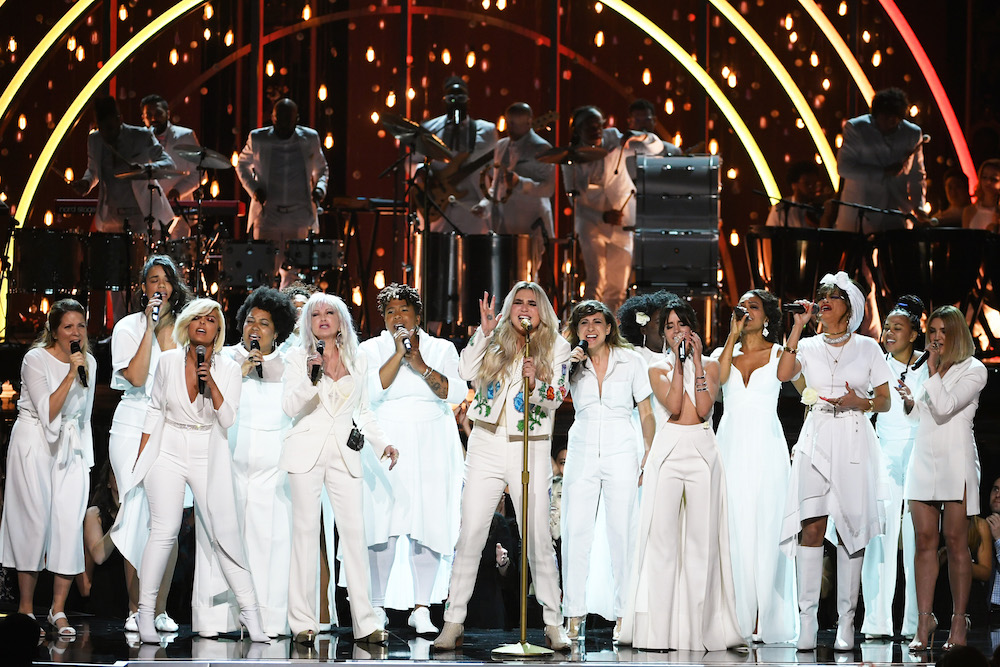 The wedding where everyone got arrested?
Oh yeah… yeah. I actually left 30 minutes before all that shit went down. It was kind of nuts. Everyone got way too drunk to handle their shit. Myself included, but I didn’t get arrested. But he’s a close friend. I really wanted to capture that essence that my mom used to talk about — all my favorite records were made of people being friends and jamming and making music in an organic, spontaneous way, and I wanted to capture as much of that in a pop record as I could.

Dr. Luke has said you had a “no guitars rule” on the last record, though.
I’ve played guitar since I was young, and I love guitar. The first time around I was really about the really grimy synths, and this time i was about combing the grimy synths with some really disgusting guitars and feedback. I’ve been living off Iggy Pop and the Stooges, Marc Bolan and T. Rex and I was like, fuck, I need guitar. And I need a lot.

Your cover of Bob Dylan’s “Don’t Think Twice, It’s All Right” was really a turning point in your career in terms of public perception — people who’d dismissed you started taking you seriously.
When I recorded that, it was an accident. I recorded it on an air mattress in my empty house. I was practicing the cadence and lyrics, and it just really hit me hard, lyrically, how relatable it was to my life. I’m a free, mouthy, wild child. So for me, it’s almost harder to strip that back and be vulnerable and raw and not try to put on some sort of front. It was hard for me to give that to the world to judge. But I’ve heard people said that was a turning point as far as whether or not they thought I could sing.

So let’s talk about the cult imagery in your “Die Young” video.
I am fascinated by cults and always have been. Even in middle school, I loved reading about them. I’m fascinated by people that have like, so much power over other people. They’re tragic, some of them, but the stories are so fascinating.

Are you aware that there’s a sector of the world that believes Jay-Z is a member of the Illuminati, and that your video was stocked with Illuminati symbolism?
[Laughs] That’s funny! I love that!

A wave of empowerment anthems arrived around the time of “We R Who We R.” Did you feel a cultural shift around then, that pop suddenly felt like it had to be “responsible”?
At least for me, that was a product of me reading about an epidemic of gay bullying and gay suicides. My little brother is in middle school, and they’re so young, and so naive, and to be told they’re not allowed to be themselves is so heartbreaking to me. I wanted to write a song that was fun and super positive but had an underlying message of acceptance. If you make it fun and not preachy it can go all over the world. We’re still really struggling with acceptance, especially over sexuality, and anything I can do to open people’s minds to being more kind and accepting of each other, I’ll continue to do. Warrior has definitely been affected by gay, lesbian, and transgender fans. Last week in Australia, this girl came up and told me she was going to kill herself except my music saved her.

There are a lot of moments on Warrior about the idea of dying young, but it seems to come from a place of urgency rather than depression.
Exactly. You may or may not only live once, who knows if the world is going to explode in two days, why would we sit aorund and worry about stupid shit and be mean to each other? Why don’t you just love each other, love yourself, live in the moment, and fucking party? That’s kind of my message.