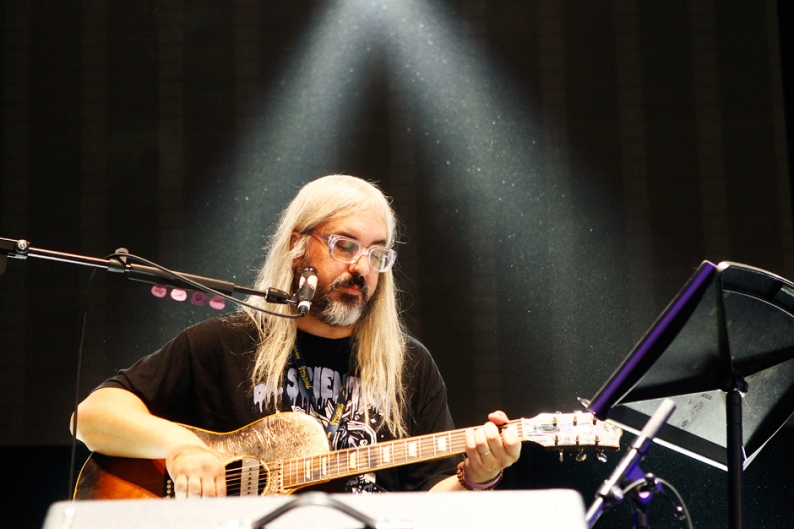 Dinosaur Jr. main man J Mascis isn’t exactly a Chatty Cathy, as noted in SPIN’s recent feature on the band, “Rediscovering the Gnarl.” As David Bevan notes, there was a time when “Mascis rarely communicated with his bandmates verbally, exerting total, silent control over the songwriting process and the trio’s direction.” Which is why it’s a total shocker, if not evidence that miracles do exist, to hear the elusive indie rock godfather go toe-to-toe with comedy podcast king Marc Maron in the latest hour-long installment of his popular, twice-weekly WTF series.

That’s not to say Mascis goes in for any fancy footwork, verbally speaking, but in the same way that his low-key presence lorded over those old Dino jam sessions, he manages to run the show in his own way, talking about his dentist father (a “Tony Soprano-like character”), the weird old hippie who recorded the band’s earliest material (“He hated us”), and the reason behind his decision to settle down in the town that he grew up in (“It doesn’t seem that bad”).

Mascis closes the show by playing acoustic versions of “Listen to Me,” from his 2011 solo album Several Shades of Why, and Dinosaur Jr.’s “Repulsion,” from the band’s 1985 debut, Dinosaur. “I love it man, this is like the best show I’ve ever been to,” says Maron toward the end, and his enthusiasm hits Mascis like a BB bouncing off the backside of a bear. Well played, gnarlmeister, well played. Preview Episode 338 below, stream it via the WTF site, or download it immediately.