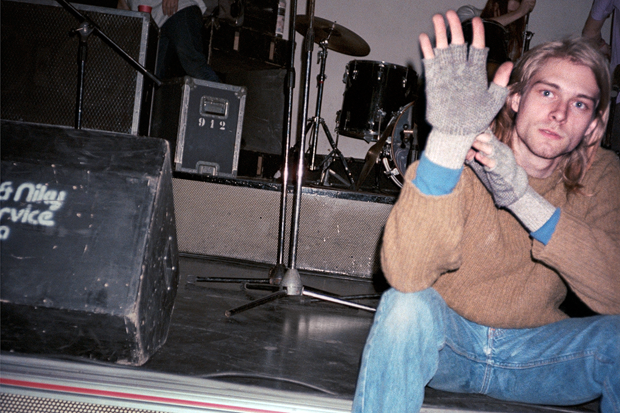 Circa the late ’80s, former college radio DJ and subterranean-music diehard Bruce Pavitt co-founded Sub Pop Records with his business partner, Jonathan Poneman. Seattle upstarts Nirvana were one of the label’s earliest and most volatile acts. Their debut LP, Bleach, was merely a cult success at the time. Now, it’s regarded as the opening salvo from a band destined to rewrite rock history, and Pavitt, having ceased day-to-day management of Sub Pop in 1996, lives with his family on Orcas Island, Washington, where he continues to be a passionate musicologist. But over an eight-day span throughout Europe in the fall of ’89, Kurt and Co. were just three world-weary dudes cramming into an impossibly tiny Fiat van, opening for more established Sub Pop bands Tad and Mudhoney. Pavitt, along with Poneman, went along for the journey as this caravan of Pac Northwest indie misfits played small clubs and large festivals alike. With a tiny Olympus pocket camera, Pavitt captured the minutiae and magic of touring, bonding and, in Nirvana’s case, exploding artistic potential.

The result is Experiencing Nirvana: Grunge in Europe 1989, an interactive eBook that features images from the road and reflections from the author, as well as embedded audio files, virtual maps and a fascinating compendium of archival media clippings. While visiting Manhattan, the loyal Washingtonian chatted with us about re-claiming grunge, reconciling tragedy and the importance of brotherhood.

For years, people ran away from the term “grunge,” but your book seems to be re-embracing and re-contextualizing it. Was that part of the intent?
Absolutely. What the book implies is that there actually was a scene, a community, a sound, a culture that’s important. When I read about the history of the Sex Pistols and the Clash, I know I’m reading about punk bands, and that has a certain connotation. And there without question was a culture and a style and a sensibility that came out of Seattle, particularly with [Nirvana, Tad and Mudhoney], and I wanted to embrace that.

Everything has to have a name, so we may as well author it in a meaningful way.
Yeah, I’m hoping the book captures the exhilaration of that period. It had its roots in punk. It was confrontational to a certain extent, but there was a lot more humor in the [grunge] scene, and it wasn’t nearly as politically self-righteous as a lot of the hardcore punk scene had come into. It was kind of a reaction against what had become the punk ethos at that time. It was about totally unwinding and letting go. It was very exuberant, very liberating, very joyful.

You also talk about how grunge was more musically soulful than most punk. Was that soulful quality what ultimately got misinterpreted as angst?
When you step back and look at the story, it’s gloomy, it’s dark, it’s rainy. So once you start using words like that to describe the context and the environment, the angst story just kind of drops in there and fits. But I do believe that a lot of [the] music was really soulful. I would say the godfather of a lot of that energy was Iggy Pop and the Stooges. It was the one act that everyone was listening to that embraced that level of emotional intensity and letting go onstage. And if you think of Iggy Pop as a soul singer, which I do, then I think the soulful comment makes a lot of sense.

Was now the right time to release Experiencing Nirvana, since as a culture we’ve had time to separate grunge from its fashionable aspects?
There were a number of things that came in play. First of all, we know that culture goes in cycles. People get excited about something and then there’s a long breathing period. I knew I had a batch of memorabilia, photos and such that got stored away, and I knew at some point in the future I was going to reevaluate that and hopefully put something out. Instinctively, it just felt right for me timing-wise in my personal life. I felt ready to go back and review some of that material. Certainly, Kurt’s death was very traumatic for a lot of people. I had a hard time listening to Nirvana’s music after that. It took me quite a while to process that to be quite honest. I knew there were a couple of really interesting photos. In particular, Kurt in front of the cross [at the Roman Colosseum] I felt was a very potent photo. But I also thought that most of the photos were throwaway, out-of-focus pics of my buddies drinking beer backstage. But the more I went through, I realized there was a really interesting story, and these photos collectively are very powerful because there’s a narrative there. I got more and more excited about wanting to share that.

There’s no way to portray a happy ending to Kurt’s tragedy, but was the book partly an effort to recast him and Nirvana in a more innocent and hopeful light?
As I went through the photos, I felt very inspired because it brought me back to a pre-Nevermind era, where there was an indie culture that was motivated by different values. Post-Nevermind, bands all started talking about deals, wanting to get on Letterman, getting commercials for McDonald’s and so forth. So it inspired me, and I was hoping it would inspire others to revisit that particular time in history of indie culture where you can sense the level of integrity, the level of camaraderie, the sense of community. There were a lot of very positive values about that culture. Seeing the bands hanging out at Rough Trade signing records and Meat Puppets posters in the background, it really brings you back to when it was more intimate. And you could tell that the participants were there simply for the love and joy of making music and sharing music. The narrative itself does have a very positive resolution. Kurt dealt with some personal challenges, as he did with his life in general, but the ending is very potent. Their situation at that time [was] they opened a show, but they completely blew away the most jaded audience in the world, and they went on to higher levels of “success.” So I thought it ended on a very positive note. I thought that these were stories a lot of young people could tap into. They could sink into Kurt’s personality and appreciate the band without leading with a lot of sadness. You read any of the Nirvana biographies, it’s an exciting story but it’s a tragic ending. It’s very painful, actually, to go through that. But I thought this could be very healing and inspirational for a lot of folks.

There’s one photo in particular of a girl at Rough Trade Records holding her copy of Nirvana’s “Blew” 12-inch and Tad’s God’s Balls LP. It really captures the surreal paradox of her pure discovery and the unknowable value of what she just purchased.
I love that photo too. Once again, it’s like, “Wow, here I am in a store surrounded by friendly rock stars who are totally psyched to be finding their record.” That Nirvana record, they only made 3,000 copies, but at the time, that was about appropriate to their level of popularity. It’s not like Nirvana just sold 10 million records. It’s, “Hey, I just discovered this really awesome band, and my friends most likely haven’t heard about ‘em, and I’m gonna go turn ‘em onto this awesome record.” That’s what the culture was all about. It’s a trip. For me personally, we released Nirvana’s “Love Buzz” single, and my wife at the time hand-numbered all 1,000 copies. Everything was a labor of love. No one was making any money. And then years later, seeing the record go for like $3,500 on eBay, it’s a little surreal.

In general, putting the book together, did you feel disembodied from the material?
Not really, because this really brought me back. It took me many, many years where I could appreciate those memories without the whole filter of, “Wow, my friend killed himself.” I finally reached a place where I could honestly go back and go, “That was an amazing time, and I really appreciate it.” It’s a very sincere offering to Nirvana fans, music fans, what have you. I know there’s been a relentless commodification of Kurt Cobain and Nirvana, and I was a little sensitive about putting out a Nirvana book, but I really think this is an awesome textbook as it were. I took great care in licensing vintage articles so people could sink into the culture. I hope it works as a heartfelt cultural textbook that people can find inspiration from. That’s where I was going with it: the geek punk professor putting out his digital textbook, keeping my 14-year-old son in mind. If it’s out in iPad, he might actually check it out. That’s where I was coming from, from the dad point of view.

Are there plans for a small batch of hardcopies?
You’re the first person I’ve told this to, but our original plan was to do a signed 1,000-copy hardcover edition, but the process became a little overwhelming. However, that said, I’m almost positive that we will be putting out a hardcover version of this. Most likely that would happen, I would think, in the next year.

The biggest underlying theme in it revolves around the communal feel between and among these bands. Were you struck by the paradox that while Nirvana had a singular potential, it took the friendship and advocacy of everyone on that tour for them to really assert it?
That’s absolutely, 100 percent correct. Culture doesn’t happen in a vacuum, with rare exceptions. In general, culture comes out of community and friends and families, people who are nurturing and supporting a vision. It’s really important to understand that. People don’t become instant rock stars, it doesn’t work that way. If you’ve got a posse of friends who really believe in you, it can make all the difference.

In the case of Nirvana, it’s also ultimately a testament to the fact that there are bands and musicians who have an extraordinary ability to captivate us.
Yes, it’s very true. The most fascinating thing for me about working with Nirvana was to see how quickly they developed creatively, particularly Kurt. ‘Cause when we first saw them in early ’88, Kurt had a great voice, but he hadn’t really written many great tunes. But once he got into the community and hanging out with Mudhoney and seeing their explosive live shows and getting turned onto Shonen Knife by Calvin Johnson and developing as songwriters, it was fascinating to see how quickly they became great. It was not necessarily that evident from the beginning, other than having a spectacular voice. I was consistently blown away by his development as a songwriter and performer.

Was there a competitive atmosphere among your bands 20-odd years ago?
There was really not much, and that’s why that era was so fucking cool and that time was so great. When those three bands played Europe, Mudhoney was kind of the distinctive headliner, but you see these pictures of [Mudhoney singer-guitarist] Mark Arm in the middle of Nirvana’s show, he’s right next to Poneman on the side of the stage and looking at the fans and going, “Oh my God, do you believe what’s going off?” So he’s just taking great joy in seeing the opening act basically blowing people away in a sincere sense of, “That’s my friend, and he’s totally rocking it.” It’s a very beautiful moment, and that’s one of the reasons why the culture was so cool. It was very egalitarian.