Talk Normal on the Ass and Sass Behind ‘Sunshine’: Full Album Stream 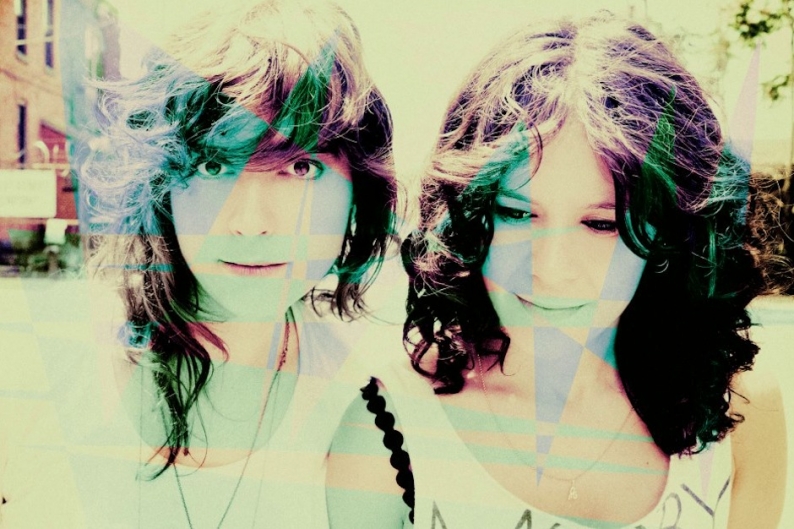 Brooklyn-based no-no wave duo Talk Normal hammer out minimalist noise-pop befitting their band’s namesake, Laurie Anderson, whose Talk Normal anthology has inspired drummer Andrya Ambro and guitarist Sarah Register in more ways than one. For their second full-length, Sunshine, the duo took some outside inspiration from Big Freedia and Merchant of Venice, cheated time and money, and braved five different studios across two states to make the most of a strapped-for-cash situation while still protecting their music. After playing together for five years and developing an almost sisterly relationship over the course of 12, conversation between the two flows as tightly as their coiled guitar lines and militaristic drums. Stream the whole thing below followed by our Q&A with the articulate duo that’s quite the opposite of intense.

You said in an interview that hardly anything is improvised with you but there were a few “happy accidents” on the new record. What were some of them?
Sarah Register: I’m not even sure people would specifically notice some of these things, but there’s a little guttural, dying/growling guitar that’s happening in the last third of “Lone General” that was a last-minute addition. It was kind of a stressful process, so it’s almost like I was sneaking in when no one was looking because every moment was important, so people would leave the room and I’d be like, “Heh heh.”

Why was it stressful?
SR: It was stressful because of time and money, all the reasons that make anything stressful. Oh, and we did go on tour in the middle of it. We were really put to the road as a band. Even the littlest things — well, not so little — like how to try to stay healthy while on tour, how to deal with being away from friends and loved ones, all that crap. It takes some time, and I think a lot of people would not want to do some of the things that it takes. That’s not going to come out right.

You recorded, edited, and mixed the record in five different locations across the states of New York and New Jersey. Why did you cover so much ground and did that peripatetic activity affect Sunshine at all?
SR: I had all these possibilities of how to give ourselves as many options and as much time for as little money, which sounds okay on paper, but we’d be digging into stuff and then picking up and moving and taking four times as long as we initially predicted it would. You’re not necessarily handed a pamphlet, “Here’s what works! Here’s what works half the time! Here’s what’s noisy!”

Was there a particularly difficult day?
Andrya Ambro: There was one day where we were going to do two, three songs of vocals, but we didn’t even get one done because we were trying to figure out the headphone routing system. That was a rough day for me.
SR: That board in particular experienced a massive dust storm after the September 11 attacks and it had some unique challenges to it.

Does it still have that aura of…
SR: Death? I’m kind of regretting saying that…
AA: Sarah once said that it put urgency in there, but there’s still a lot of joy going on as well. I think that we protected the music throughout all that very well. I’m proud of that.

Sunshine has a lot of commands in it, like “turn off your stove, chew your food, get in line, fire now, go to prom” in “Hot Water Burns.” Why?
AA: I wanted to do a list of things that I feel I am supposed to remember, and the whole point of that was, “Oh my God, when does it stop?” When I wrote that, I burned my leg about two years ago and I couldn’t leave the house because it had gotten infected, and that’s when I wrote that list of things because I was going a little stir-crazy.
SR: The stuff that I added was more storytelling, like a fairy tale thing vision in my head that I still see when I’m talking about it. I was thinking about the pound of flesh thing, because one of the things I say is “pound for pound.” If you extrapolate that into what these things take from us — which I’ve never really done before — that could go right behind Andrya’s idea of listing and why it’s needed, but also when does it ever stop.

I’m intrigued by the exclamations “Hell no” and “dead weight” on “Sunshine.”
AA: It was from the Big Freedia song, “Ass Everywhere.” We had a skeleton of “Sunshine” going and we wanted it to be more of a back-and-forth, and when Sarah passed that off to me, I had pages of lyrics! I thought that was great.

You named Sugarland after a lyric in a song because you liked the idea of people listening to the record and figuring it out, but Sunshine is much more straightforward. Why did you take the more obvious route this time around?
AA: In the movie Rockers, there’s a character named Sunshine, and I like the way Horsemouth says her name. After seeing that movie I wound up using the word “sunshine” in my daily vocabulary, like “Hey, Sunshine, could you get me that?”