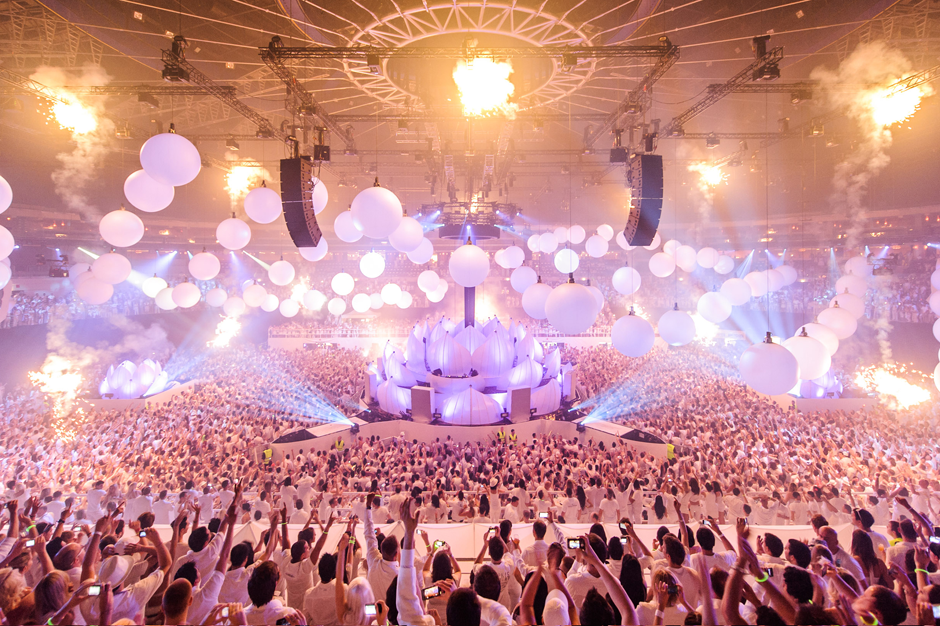 Additional tickets have been released for the Sensation Innerspace events coming to Brooklyn’s Barclays Center this Friday and Saturday, October 26 and 27, giving dance-music fans — and those who just want to dress up as Tom Wolfe for a night — a chance to catch the inaugural stateside edition of the popular global event series. Launched in Amsterdam in 2000, and now held in more than a dozen countries around the world, Sensation is known for its spectacular production values, trance-heavy lineups, and a dress code, strictly enforced, mandating that attendees dress entirely in white. (For those without appropriately pigment-free clothing, Sensation sells a variety of white duds in its online store.) But the New York edition also reveals the difficulties that organizers ID&T face in attempting to develop their brand and accommodate the tastes of a fractious public.

While Sensation has historically favored trance DJs like Tiësto, Armin van Buuren, and Paul van Dyk, its focus has shifted in recent years towards electro-house DJs like Chuckie, Martin Solveig, and Fedde Le Grand, as well as big-room tech-house types like Joris Voorn and 2000 and One. Le Grand, Voorn, and 2000 and One will play Sensation’s New York editions, along with the U.K. tech-house DJs Nic Fanciulli and Mark Knight (Sensation resident Mr. White will warm up both nights). Two names on the lineup, however, are even more surprising: New York DJs Danny Tenaglia and Dennis Ferrer.

The 51-year-old Tenaglia, old enough to have witnessed Larry Levan’s Paradise Garage firsthand, cut his teeth at Miami’s Cheers in the 1980s, held down a residency at Twilo in the 1990s, and consolidated his legendary status with his adventurous, eight-hour sets at New York’s intimate, booze-free nightclub Vinyl, where Henry Mancini’s “African Symphony” and Maurizio’s M-Series tracks rubbed shoulders in the mix with Murk’s tribal house and DJ Pierre’s classic acid. (Billboard’s Kerri Mason wrote a moving tribute to those sets, which she witnessed on a weekly basis as the club’s cashier.) Ferrer, 41, with roots in the “spiritual house” scene around clubs like Shelter and Body & Soul, is known for bridging classic New York garage with German-influenced tech-house, both in his DJ sets and with his label, Objektivity.

Largely ignoring pop-crossover EDM in favor of floor-centric tech house and classic New York sounds, the trance-free lineup is a risky move for ID&T, the production company behind the event. (The New York edition is co-produced by LiveNation.) The full lineup wasn’t released until three months after tickets went on sale — standard procedure for Sensation events, which are billed as multi-sensory experiences rather than run-of-the-mill club nights. But some fans who plunked down $175, including fees, for a single-night ticket — or $275 for a deluxe ticket, which offers “a separate entrance, free coat check, welcome drink, private deck on the pitch and access to the Deluxe area” — consider it a bait-and-switch, and they have voiced their displeasure on Sensation’s Facebook page. A sampling:

“who the hell are these DJs?”

“For $170 Daft Punk should be playing a set with Tupac and God as the headline.”

“Wow, What the hell happend to the Sensation I knew about 5 or 4 years ago? With Markus Schulz, Solar Stone and other great Trance acts? This lineup speaks for it’s self, it’s disgusting.”

“shitty line up…it will never be as good as the ones in Europe! americans dont have any idea about trance and house music”

ID&T is banking on the fact that attendees will be so blown away by the lights, pyrotechnics, and in-the-round staging — not to mention all that blinding white — that even skeptics will be converted to Sensation’s vision. Presumably, the organization is also hoping to avoid a repeat of an incident that occurred at 2006’s Sensation Black, the hard-trance and hardstyle counterpart to Sensation White, in which the crowd grew restive during a nu-metal set from DJ Rob Gee and his band, Ampt. The group’s set ended prematurely when a disgruntled fan climbed onstage and punched Gee in the head before being pummeled by Gee and his bandmates. Try and keep it PLUR, people.