Sympathy for the Lecher: Ron Wood’s Ex-Wife Auctions Off His Rolling Stones Mementos 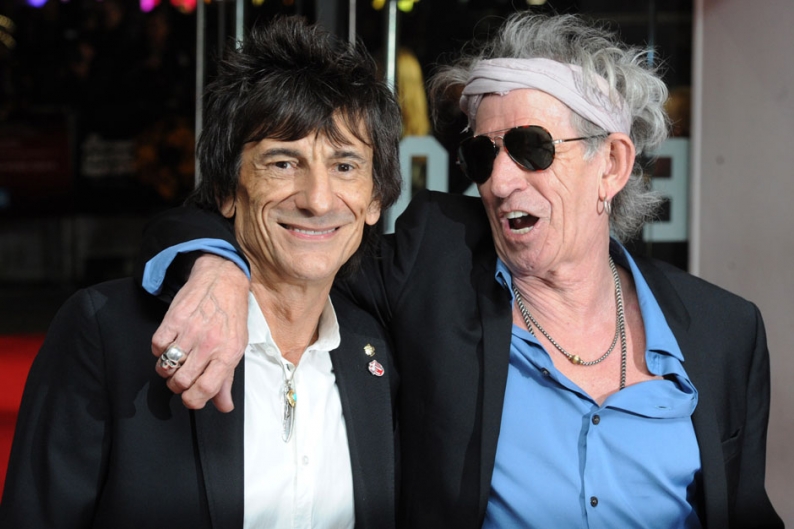 Decades’ worth of Rolling Stones memorabilia owned by guitarist Ronnie Wood was sold at a two-day auction held by his ex-wife in Beverly Hills over the weekend (October 26-27), the NME reports. The collection included Wood’s 1955 Fender Stratocaster guitar, which fetched $60,800; a white leather coat, which sold for $8,960; a lithograph of Eric Clapton drawn by Wood that features both guitarists’ signatures, which went for $5,120; and a cardboard cutout of a guitar that was a gift from bandmate Keith Richards, and netted another $6,875 for Wood’s estranged spouse.

Ronnie and Jo Wood were married for 23 years before they separated in 2008, after the guitar player allegedly had an affair with a waitress. Their divorce was finalized in 2011. When the auction was announced in September, Wood denied any involvement, releasing a statement that said, “Ronnie feels saddened that Jo has taken this course of action and wants the public to know he has not teamed up with Jo on this outrageous sale.”

The auction house behind the sale, however, described the items up for bid as jointly owned. A portion of the proceeds will go to MusiCares, the Grammy Awards charity that offers financial assistance and addiction recovery to members of the music industry.

Wood most recently joined his fellow Stones at a warm-up gig in Paris for their upcoming 50th anniversary tour. The British band will next play London’s O2 Arena on November 25 and November 29, followed by two dates at the Prudential Center in Newark, New Jersey on December 13 and December 15. That final Prudential performance will be broadcast as a pay-per-view special, “One More Shot,” at 9 p.m. EST.

The Stones are also soon releasing a three-disc career-spanning anthology entitled GRRR!, which features new song “Doom and Gloom,” in North America on November 13. GRRR! will be available in 50- and 80-track versions. The band’s 1965 Ireland travelogue, Charlie Is My Darling, will be out on DVD on November 6, and Crossfire Hurricane, a documentary on the long-running rockers directed by Brett Morgen, will debut on HBO on November 15.