Pussy Riot Member Freed, Because She Was Arrested Too Soon to Protest

A Moscow court has thrown out the two-year sentence for Yekaterina Samutsevich, whose lawyer argued she hadn't even had a chance to commit the alleged crimes. 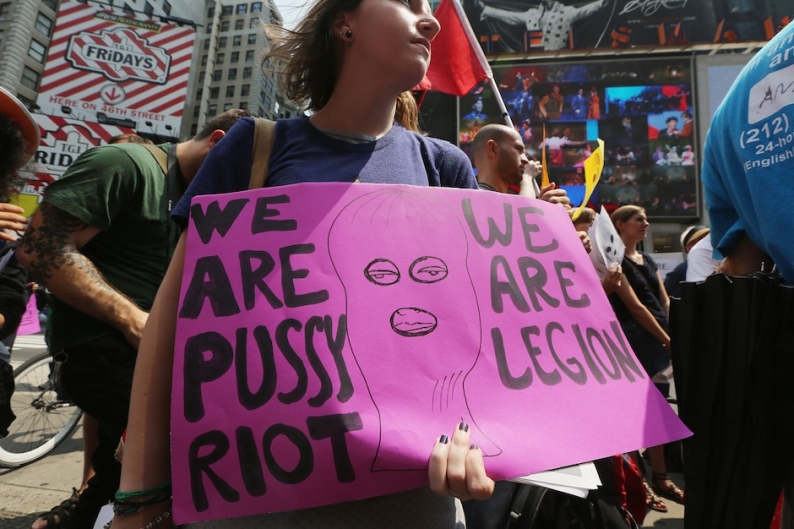 Finally, one member of Pussy Riot is free. A Moscow court has suspended the sentence for the feminist Russian punk group’s Yekaterina Samutsevich, according to the Hollywood Reporter. Unfortunately, the Moscow city court upheld the two-year sentences for her partners in alleged “hooliganism motivated by religious hatred,” Maria Alyokhina and Nadezhda Tolokonnikova.

In a bittersweet twist, the reasoning Samutsevich’s new lawyer used to get her out of jail doesn’t sound likely to help her fellow band members much. The Pussy Riot members have been locked up since March for performing an anti-government song at a Moscow cathedral. Irina Khrunova, the attorney who took on Samutsevich’s case after she fired her previous representation earlier this month, contended that his client was caught so quickly she didn’t have time to “pray, dance and yell profanities that insulted believers.” The argument was reportedly supported by video evidence and another witness’s testimony.

Although Judge Larisa Bolyakova freed Samutsevich, she ruled that Alyokhina and Tolokonnikova must stay behind bars. Attorneys for the remaining imprisoned Pussy Riot members reportedly said they would appeal — all the way to the European Human Rights Court, if necessary. The BBC quotes defense lawyer Mark Feigin as saying, “We’re glad that Yekaterina Samutsevich has been freed, but we think the other two girls should also be released.”