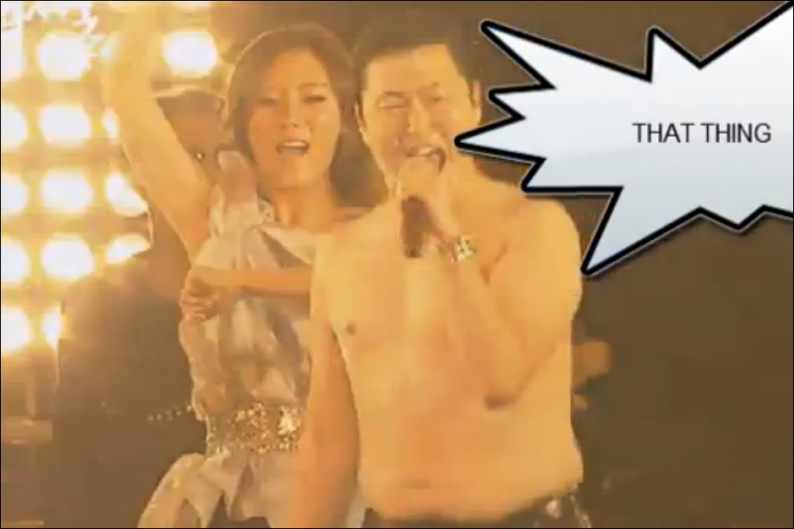 As SPIN reported in this week’s Who Charted? Billboard roundup, Maroon 5 unexpectedly saved the day by holding strong at the top of the Hot 100, hence preventing PSY from performing “Gangnam Style” topless. The South Korean meme-nomenon had promised to do an, uh, stripped-down rendition of his big hit and its corresponding horse dance if his viral song hit No. 1. Well, it hasn’t yet, but he did it anyway.

After a busy stateside visit in which he popped in to Saturday Night Live, taught Britney Spears how to do the saddle-step on Ellen, and had a legitimate conversation with Ryan Seacrest, PSY celebrated his homecoming by throwing a free show in Seoul, where, clearly inspired by the onslaught of pyrotechnics and gymnastics, he removed his shirt and proceeded to wobble wobble to an enormous crowd. (Thanks for sharing, Idolator.)

But being home hasn’t slowed his roll (no bun pun intended) where worldwide dominance is concerned. According to the BBC, PSY is hard at work on an English-language hit, although his mastery over the words “sexy lady” and public misunderstanding of the Korean chorus as “open condom style” have sufficed so far. In speaking to the British outlet, PSY astutely acknowledged the challenges ahead.

“The problem is my music video is more popular than I am,” he said. “That’s a big problem for me right now, so I’ve got to overcome my music video first … Everybody is treating me like a gold medalist. Everybody is describing me as a worldwide phenomenon, so especially for Korea, they are thinking of me as representing our country for the new history, for the K-pop history.”