And "PSY" is short for "psycho" 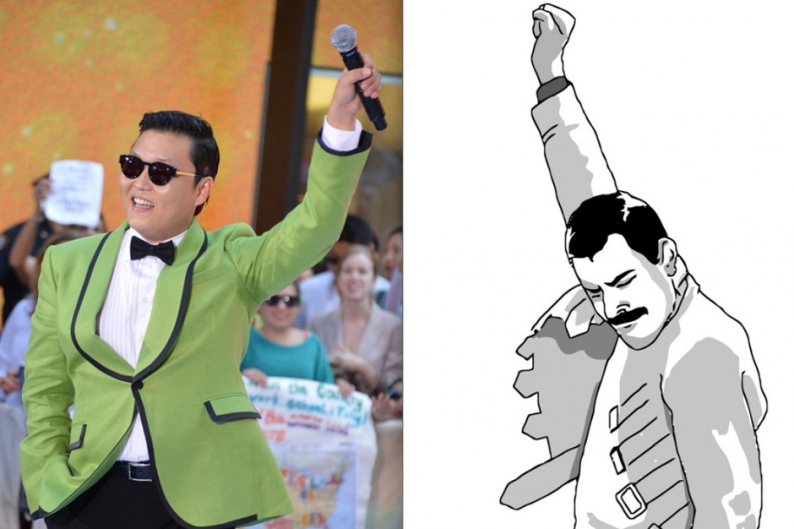 He may have the top-selling rap song in the country, but PSY takes his musical queues from the God of Rock. In an Ask Me Anything session on Reddit Wednesday (October 24), the South Korean pop sensation, whose campy and colorful onstage theatrics are a hallmark, revealed that Freddie Mercury inspires him. (Do we smell a potential cameo in Sacha Baron Cohen’s 2014 biopic about Queen’s fallen frontman?)

The K-Pop king also explained that PSY is short for “psycho,” that the Ohio University marching band’s parody of his breakout single is his favorite, and that his mega-hit is not in fact a social critique, but “just FUN!” Now at work on an English-language single, PSY also said that if he could collaborate with any one artist or band, it would be, unsurprisingly, with his Schoolboy Records labelmate Justin Bieber. It couldn’t be any worse than that unworthy Carly Rae Jepsen mashup, could it?

Even after September’s informative interview with Ryan Seacrest, PSY claimed there’s one detail people don’t know about him that he’d like to get out there: The international star composes all his music himself. That includes “It’s Art,” which PSY said was his own favorite song, after “Gangnam Style.” And to anyone already crying “one-hit wonder,” PSY said he isn’t bothered that most people only know him for his viral dance hit, assuring, “I can fix that later!”