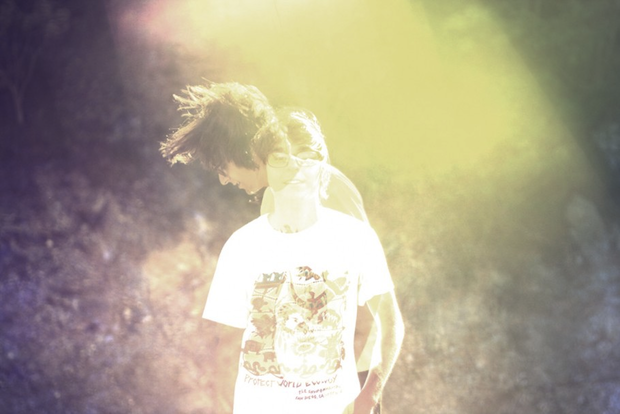 There seems to be some confusion about Kendrick Lamar’s good kid m.A.A.d city, even after the rapper’s major-label debut went up to iTunes for pre-order, earlier this week. The track he did with Lady Gaga, “PARTYNAUSEOUS,” was nowhere to be found on the iTunes tracklist, and that’s a good thing. Still, encouraged by this MTV piece on a 9/18 listening party that said the track was played, and years of experience with labels ruining rap albums with cloying crossover cuts, plenty of rap fans just assumed we would endure Kendrick going Gaga. This guy’s got a song with Lady Gaga in his backpocket, why wouldn’t he use it? Yesterday, Hip-Hop DX reported on a Power 105 interview with Lamar where he confirmed that “PARTYNAUSEOUS” would not be on his album. The Gaga track(s) — yes, there’s apparently more than one — were “set…aside for future reference,” Lamar explained, confidently adding that he “already had everything premeditated” for good kid m.A.A.d city. In other words, the giant starpower-fueled collaboration didn’t really fit, and rather than stick it on there anyway, he’s saving it for later. Who does that? Who gets to do that? This Kendrick fellow knows what he’s doing. Then again, except for me, it seems like everybody else already knows this.

DJ Drama, feat. 2 Chainz, Meek Mill, & Jeremih, “My Moment”
Jeremih murmurs like Future if that dude had rhythm, and producer T-Minus, who specializes in these grinding glorious rinky-dink synth bangers, creates a blissed-out Blade Runner beat, over which 2 Chainz and Meek Mill talk about how they’re just a few moves away from superstardom, but not that many away from going back to hustling, either. In a lot of ways, this is just a New Underground low-stakes grindin’ anthem in the mode of Main Attrakionz or G-Side. It’s full of spaced-out sounds, gruff autobiographical details (2 Chainz: “Old dude met mom, it was on / Then he named me over the phone, prison term”), “the rap game kinda sucks” inside baseball confessions (2 Chainz: “Made more than I ever made with D.T.P. this year”), and blunt street talk (Meek: “If I’m a starve, I pull heat”). This was a single back in the summer, video and all, but it didn’t go anywhere. Who the hell knows why. From DJ Drama’s Quality Street Music, a hyper-enjoyable radio-rap compilation that takes a few risks, especially during its WTF middle, which pairs Waka Flocka with Tyler, the Creator, and through some sonic connect-the-dots finagling — it’s all about the vague, Ennio Morricone-ness of both of these beats — gracefully transitions from DJ Mustard’s “Real Niggas in the Building” to Common and Kendrick Lamar’s Hit-Boy-produced “My Way.”

ISSUE, feat. Das Racist, “Teaholics (Rise)”
On “Teaholics (Rise)” (don’t forget that vaguely threatening parenthetical), the son of E-40, ISSUE, teams up with brother Droop-E on the beat, and Das Racist for rhymes, creating a dirge of an anthem for all the tea fiends out there. By the way, “tea” is not slang for a drug harder than caffeine, the goofy teen just really loves tea. The song is endless and insane, but it will get stuck in your head until you accept its outsider art-rap charms. Heems, who has been taking rapping very seriously lately, straight goofs off here, making fun of dummies who treat chai like it’s some special thing and not just the Indian word for “tea,” and says some unkind words about Wes Anderson’s Darjeeling Limited: “Darjeeling Limited, that’s a bad movie / Spiritual tourism, not so groovy.” But Darjeeling Limited is a movie mocking dumb white people engaging in spiritual tourism! Almost every Wes Anderson movie takes on some white ppl-ism and then unravels it, showing it to be a shield against bougie insecurity! Anyways, after that, Kool A.D., tells you about a bar with sand on the floor and it sounds glorious, then calls himself “young brown V-Nasty.” Finally, ISSUE talks like a dude-bro until the whole thing fades out. I don’t know, either man, I just know that iTunes tells me I’ve listened to it 17 times this week. From ISSUE’s Waves Of Italy.

Rick Ross, feat. Usher, “Touch’n You” (Balam Acab Edit)
Blurry, slurry Tri-Angle Records producer Balam Acab pokes fun at Ricky Rozay’s bloated rap-and-bullshit “collabo” with Usher, as well as all this dragged-out, trap-tinged, mostly unlistenable witch-house bullcrap that has awkwardly and petulantly started a one-sided conversation with mainstream hip-hop and R&B. Way-too-high-in-the-mix sounds of water splashing make this “edit” close to unlistenable, while everything about the God Forgives, I Don’t single is slowed-down, turning the already rumbly-voiced Ross into what I imagine Gloppy the Molasses Monster from Candyland would sound like, if he hopped on the mic. There’s only one way to make stupid lines like, “It’s me against the world, now what’s your phone number / Jumping in that Range Rover and I’m coming over!” sound more vacuous, and that’s by stretching them out and making you sit with them for a few extra seconds. Usher, meanwhile, still sounds great, even all slow and junk; a bit like David Ruffin or some other deep-voiced soulster from back when, well, R&B dudes were allowed to sound like sexy fat guys. If garbage like White Ring remixing Waka Flocka (AND PUTTING A BULLETPROOF VEST ON THE COVER!!!???) sticks in your craw, then this one is a welcome, exorcism of one-quarter-clever trap-rap fetishism from kids-too-cool-to-be-goth-back-then now playing goth for cool points.

UptownXO, “Errybody”
Surrounded by high-pitched yelps and click-clack percussion, a horn sample is sliced thin and then contracts Don Cannon-style every once in a while, and right before the hook, it all goes AraabMuzik, one glitching drum sound blasting out of the mix. “Errybody” has the sort of beat that’s usually great for saying absolutely nothing over, and that’s just fine. But the trick here is the blur of details of D.C. living that XO unleashes. From romantic, poetic descriptions of dealing dope (“Street acrobatics with the packages that we may flip”) and a succinct explanation as to why the dealing is done (“We used to hustle by the corner store / College wasn’t affordable,” a couplet that I assure you, totally rhymes via XO’s Mid-Atlantic accent), to late-night bottle service-partying, and even some half-insulting inspirational talk (“Do the impossible, be yourself not a prostitute / Life is a bitch and she ain’t looking too fond at you”), here’s the inclusive sentiment of Sly & the Family Stone’s “Everday People” couched in the sounds of an old evil Neptunes future-funk banger like “Superthug.” Produced by AB the Pro, “Errybody,” is the most anthemic, non-Fat Trel song from Washington, D.C. since Wale’s “Nike Boots.” The video for this has been out for a couple of months, but you can hear it on UptownXO’s latest mixtape, The Color Grey, which dropped this week.

Z-Ro, “These Days”
Though this typically wizened song from Houston’s Z-Ro, off his new album Angel Dust (not a rap version of the Faith No More album of the same name, unfortunately), and while it certainly grabs from the same sense of “why even go outside anymore?” wistfulness, it is not a cover of the Jackson Browne-penned song made famous by Nico, and famous-er by its use in Wes Anderson’s The Royal Tenenbaums, and then after that, a K-Mart commercial. This “These Days” is at least two years old, and has appeared on a few Z-Ro releases before. It seems like the dude has no control over his recorded output right now. Earlier this week he tweeted, “Appreciate the love on “Angel Dust” from everybody. I honestly don’t kno what’s on it tho. All I kno is that’s my last rap a lot album.” On the beat, Mannie Fresh disciples Beanz & Kornbread lay a Chris Isaak guitar whine over top footwork-like electro slaps (imagine a cyborg trying to play hambone). You’re listening for Z-Ro, though, the most sincere man on the planet maybe, imparting old-head wisdom, bemoaning the kids these days (who acted just like he acted when he was a kid), and yes, reminding your ignorant ass that Christ died for your sins, so get your act together, while you still can. It may already be too late for the man known as Relvis Presley.