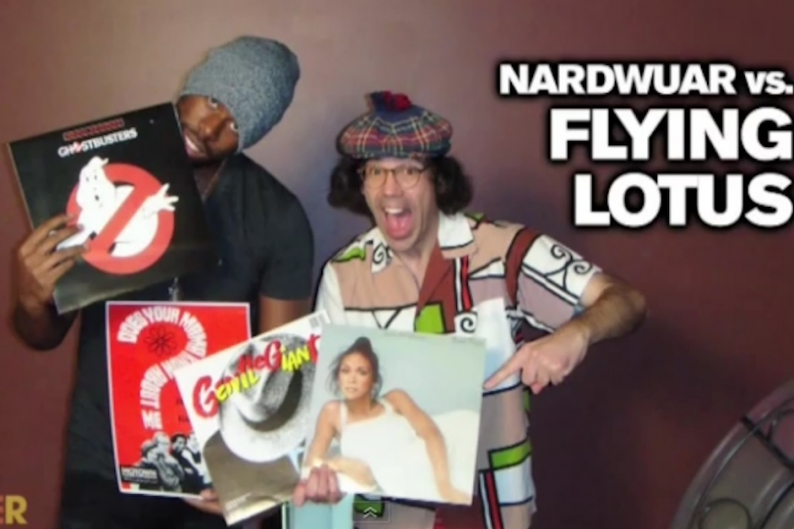 From Kurt Cobain to Tyler, the Creator, no one interviews artists as colorfully as Vancouver’s Nardwuar the Human Serviette. In his latest conversation, Nardwuar catches up with producer and Until the Quiet Comes beatmaker Flying Lotus. As usual, Nardwuar comes bearing gifts that he dug out of the dusty dollar bins at Vancouver record shops, and this time he unearths something especially close to FlyLo’s heart: A copy of R&B singer Freda Payne’s Stares and Whispers, which features “I Get High,” a song co-written by the FlyLo’s pot-smoking grandmother Marilyn McLeod. Everyone knows that the DJ’s aunt was John Coltrane’s wife Alice, but the McLeod kinship is more obscure, so it’s yet another one of those great revelations that only seem to arise during Nardwuar interviews.

Not only that, Nardwuar found a Yusef Lateef record featuring Lotus’ great-uncle Ernie Farrow, which renders FlyLo speechless. Nardwuar does his research and/or uses Ancestry.com. We also learn that FlyLo used to live near a couple of Boogie Nights shooting locations, which makes sense considering one of his high school classmates wound up becoming a semi-famous porn star named Lacey Duvalle. Flying Lotus also finds out — via receiving a World Class Wrecking Cru single — that Dr. Dre himself watched FlyLo’s Coachella gig from side stage, and discovering that really blows FlyLo’s mind. Like hundreds of artists before him, Flying Lotus mutters “This is so weird” right before the interview wraps. Watch the entire conversation: