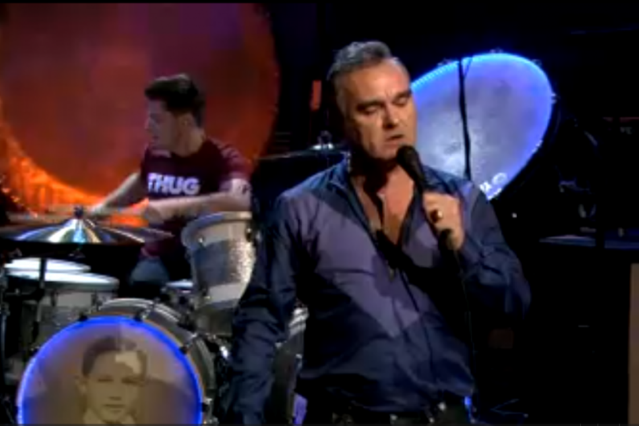 That Morrissey, always one step ahead. Rumors and subsequent refutations of the idea that the Smiths might ever (ever!) get back together just happen to coincide with their former frontman’s unorthodox new tour, which kicks off on Friday in Boston. The Pope of Mope brought his usual savoir faire to Late Night With Jimmy Fallon last night, debonairly translating Four Seasons softie Frankie Valli’s 1968 M.O.R. hit “To Give (The Reason I Live)” into the muscular rock arrangements of Moz’s post-2003 material. Morrissey performed in a shiny, amply unbuttoned shirt, while his band wore matching “THUG” t-shirts. As a web exclusive, the English gentleman and his gang performed death-and-sex anthem “You Have Killed Me,” from 2006’s characteristically poignant Ringleader of the Tormentors. “Drive safely,” Morrissey concluded. “Don’t kill me.”