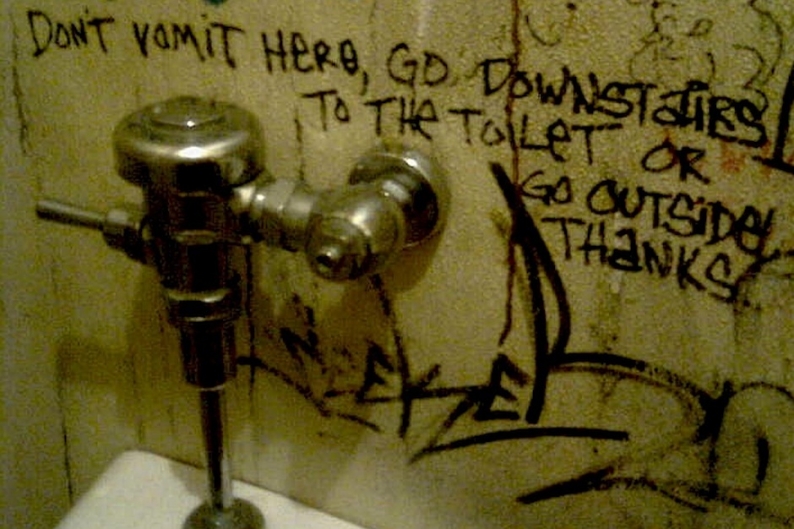 Fellow Americans, I don’t know if you’ve noticed or had the opportunity to see for yourselves, but this country is vast and elephantine. There are many different landscapes, some mind-bogglingly gorgeous; clean, untouched rivers snaking around angular mountainsides; green-and-yellow plains that seem to stretch flatly into oblivion. Thousands of forests, full of trees I can’t identify, sit quietly growing and doing what they do best without help from anyone.

From the sheltered van in which I ride, hidden by tinted windows, surrounded by the collective aroma of five other guys and the evidence of what we have consumed in the last six weeks, I fantasize about running alone in the fields, climbing trees, swimming in icy waters and drying in the sun. I try to image silence, or the simple sound of a breeze or the warning cries of a hawk. There is also an abundance of abandoned failures. Boarded up buildings that Mother Nature has no hesitation about reclaiming; unwashed, beaten down people shuffling along the roadside, mumbling to themselves as they purchase a case of Bud Lite with spare change in callused hands.

I am reminded of the brutal lyrics from Simon & Garfunkel: “Nothing but the dead and dying back in my little town.” At times I am grateful to get back into the shelter of the van. If I can survive another truck stop without getting shot by some hick who can’t figure out my Nicki Minaj T-shirt or my “long” hair, then I’m happy to eat fried chicken out of a paper bag in the insular world of this entourage. Of the 400 million people living in this country, the diversity and variation is not any less than that of Europe and its 47 countries. The dialects of English in this nation, not to mention the priorities of the locals, are well beyond any real semblance of “unity.” I could not imagine trying to represent the people of this nation. It’s just too big and too weird.

I grew up in a small town where I had to extend myself to find the culture I was interested in. Ultimately this inexplicable penchant for the so-called avant-garde or diversity or whatever you want to call it, led me to live in New York City, the capital of everything. That said, thanks to my father’s side of the family, I have distant yet discernible roots in the South. I went to a family reunion in southern Missouri when I was a mullet-sporting metalhead in high school, and even though I feel like a complete outsider in this part of my country, there is something untouchably familiar about it. I almost feel like if I just make eye contact with some greasy, ready-to-unhinge hillbilly and give him a nod, he will understand that I understand. He’ll leave me alone and let me go on my way, as I will for him. I don’t give a shit who he votes for or whether he’s illiterate or not. If it weren’t for my desire to eat Korean bib at 4 a.m., visit an installation of Iannis Xenakis’ architectural-music scores, or get paid to play free-jazz with lesbians, I would probably buy a shack in the middle of Alabama four acres from any other building. I would somehow feel at home and yet, I doubt I would befriend the aforementioned farmhand. 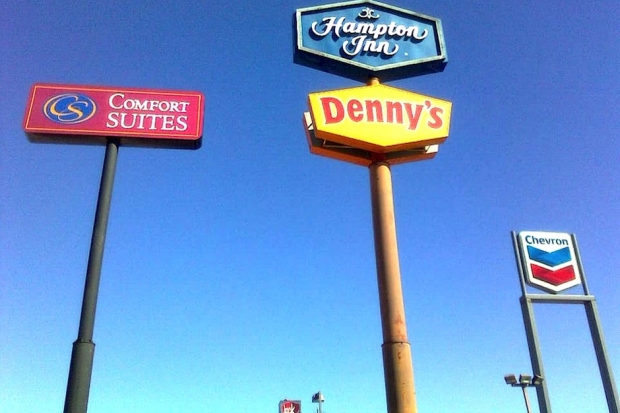 Against a motionless, blue horizon stand an array of tall, lonely fast food signs; they hover in the air reflecting the sun off of their red and yellow plastic logos; irreverent, harsh bullhorns calling the sheep into feed; primary colors for primates. We pulled into the ten-thousandth gas station off the side of a barren highway, roaming the tiny aisles of the mini-mart looking for something to snack on despite having absolutely no hunger pangs. There is always a double-feeling of guilt in this scenario. One is personal — that I have no business purchasing this crap that I don’t really need. But, it’s like watching TV, I am mesmerized by the shiny packaging, the taunt of immediate gratification. I am a victim of the system I help create and I oblige willingly. The other guilt comes from the watchful eye of the shop clerk. I wouldn’t want that job. At some random moment of the day or night a swarm of six guys, disheveled and smart-mouthed, simultaneously push open the doors and head for the bathroom or the coffee machine, or just loiter for a bit. We are dressed mostly in black, stained clothes, unshaved and clearly “not from around here.” I’d be worried. I make my selection and walk to the counter but the clerk has disappeared somewhere to the back of the store. I stand there for several minutes thinking about how much crap could be pilfered. There’s nothing in here worth the risk, plus memories of being disciplined as a kid for stealing linger in the deepest parts of my Freudian psyche. I wait patiently, staring at energy drinks, mints, cigarettes, lotto cards, male enhancement pills — the baubles of Western humanity, the flotsam and jetsam of the modern American, and maybe everyone else, too. Eventually, the clerk returns. I say, “Hi, how you doin’?” She says nothing. Not a peep. She rings me up and hands me my change while I steal a look at her cold face which gives up nothing. Later I think of things I could have said such as, “Oh, that good?” or “Yeah, I hear ya.” But I accept the communication breakdown gracefully. I let her have her shitty day and carry on with her shitty life. Far be it from me to assume anything about anyone. Maybe she’s perfectly happy, content, spiritually enlightened and loaded with cash.

Walking back out onto the asphalt I stand next to the diesel pump and feel the heat of Dixie below my feet. From about 75 yards away, down an over-grown embankment strewn with litter, a robust woman comes jogging out of a Waffle House and yells something at me. I look in her direction offering no response. She yells again, “Is that a vaaaaan or a buuuuus??” I continue to gape in her general direction completely confused by this question until it finally dawns on me to respond. “It’s a vaaaaaan,” I holler. She cups her hands around her mouth and shouts in a barely discernible drawl, “We were all of us inside tryin’ to figure out wut it wuuuuuuz.” My expressionless face betrays the mild disbelief behind my eyes. A million images flash after a pale gaze. What was that discourse inside the Waffle House? Why is this an issue? Who cares? What is the meaning of life? Why are some people lucky when others are born into endless despair? Would I rather freeze to death or die in a fire? She scuffles back into the restaurant, I hop back into my seat in the van, taking a sip from a refrigerated Starbucks double shot in a can.

In Jackson, Mississippi, I am more than pleasantly surprised by the quality of the chopped salad, seared tuna tacos, and caramelized bread pudding with agave cream. The dressing room is a forgotten fry kitchen. A vat of grease stagnates and a pilot light burns on the stove continuously to keep the thing from blowing up. The crowd of barely 100 people are enthusiastic and friendly. They’re actually listening to the music, not yelling over the top of it so much. One kid purchases my duo CD of experimental, improvised music. He asks, “What am I getting myself into here?” as he breaks the shrink-wrap and hands me a Sharpie. The town reminds me of the one I grew up in. Empty, clean streets with little to offer in the way of culture and entertainment; isolated souls at every turn. I get it. 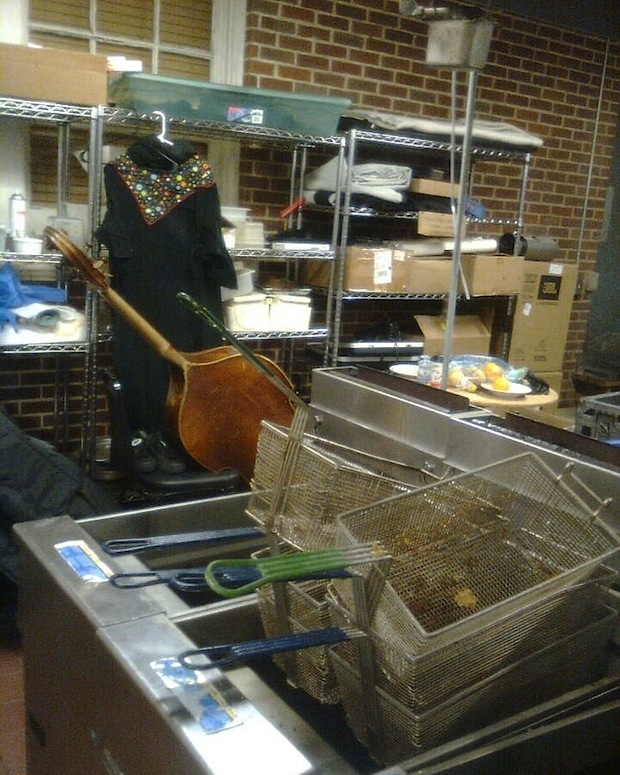 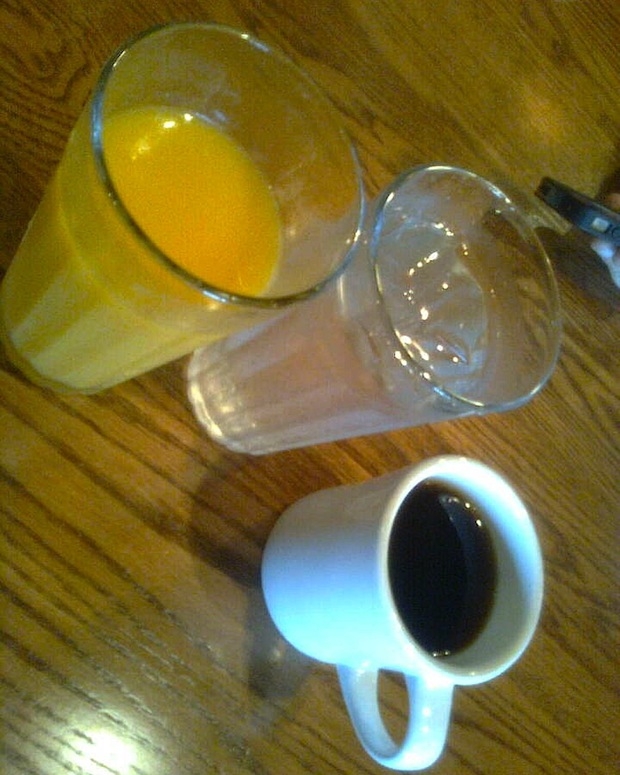 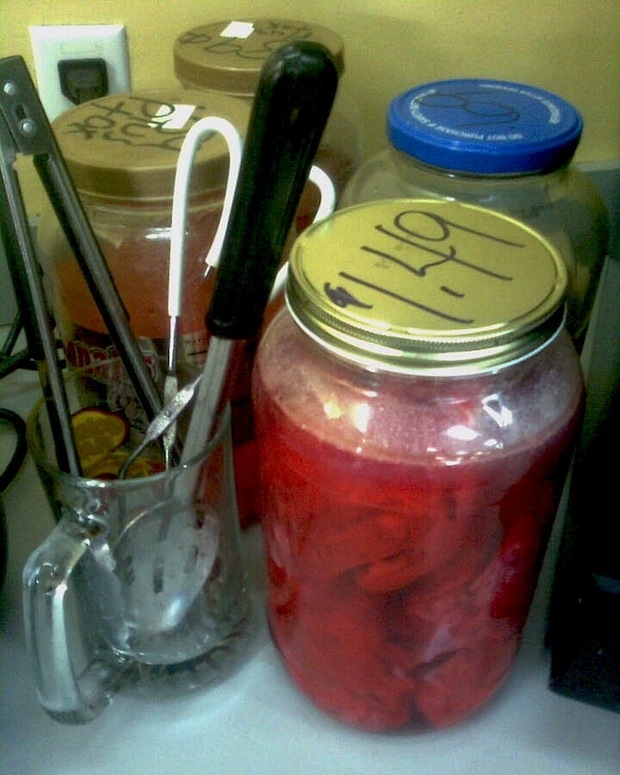