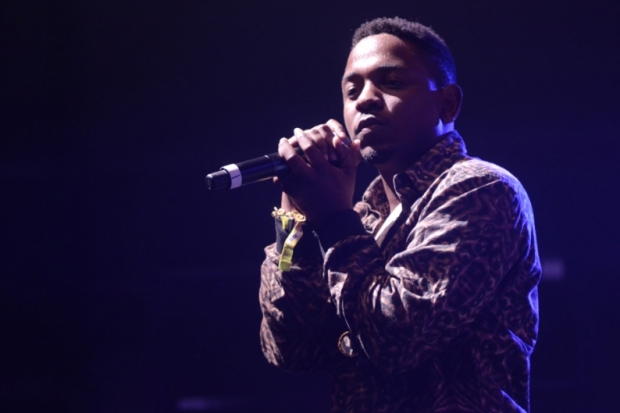 From that XXL cover that tries to claim that Dr. Dre is responsible for Kendrick Lamar which just isn’t true, to Snoop and Dre pulling him up at Coachella to rap on the same hallowed ground as the Tupac hologram, and now, “Compton,” the second single from the upcoming good kid, m.A.A.d city to feature the aging-out mega-producer, this Dre connection is really getting a push, isn’t it? Industry types seem to have it stuck in their heads that the West Coast production legend can still grab people’s ears.

Not even his production chops, mind you, just Dr. Dre’s presence, because “Compton” was produced by Just Blaze, and “The Recipe” by Scoop DeVille. Dre’s here to add some starpower that I’m not so sure he even exudes much anymore. But to old dudes who run radio and the marketing mooks who serve them, the D.R.E.’s involvement still holds a lot of weight. Plus, Dr. Dre may be getting more out of this than Kendrick Lamar, and at the very least, it’s a mutually beneficial relationship, which speaks to our current era of reverse co-signs, in which veterans pop up to rep some youngster (who doesn’t need to be repped) and glom off some of their fresh-faced buzz. That’s got to be a new strain of Retromania, right? Well, hopefully, Kendrick can at least pull Dre out of his mad genius O.C.D. stupor and release something!

Unlike “The Recipe,” which felt underwhelming on purpose, “Compton,” is a suspenseful single that has no time to relax and ride-out. It finds Kendrick refusing to hedge his rapping for the expectations of radio, marching straight into the song and sounding genuinely hungry: “This is king Kendrick Lamar / King Kendrick and I meant it, my point intended is raw / Fix your lenses, forensics would’ve told you Kendrick had killed it / Pretend it’s a massacre and the masses upon us / And I mastered being the master and dodging your honor.” Kendrick sounds confident, here. Like, he’s ready to stand in front of everybody and puff his chest out.

Contrast “Compton” with the album’s previously released songs “Swimming Pools (Drank)” and “The Art of Peer Pressure,” where Kendrick climbed inside of his head and asked everyone to come with him, and the latest single’s immediacy is clear. “Swimming Pools” and “Peer Pressure” worked best as bugged-out P.S.A raps in the mode of J. Cole’s I’m-a-nice-guy-anti-charm and Drake’s I’m-oh-so-conflicted smarm. “Compton” is radio-single breezy yet boastful, and it still affords Kendrick the chance to dole out some of his rarefied kind of lyricism. Detailing the socio-poltical roots of his hometown’s brand of hip-hop, he raps: “We can all harvest the rap artists of NWA / America target our rap market, it’s controversy and hate / Harsh reality we’re in, made our music translate.” That’s a fairly cogent explanation of hip-hop’s social importance even when it’s tagged “gangsta rap,” and coming from a guy who scans as positive to most listeners, it holds some additional weight.

This beat is, apparently, three years old according to producer Just Blaze’s Twitter, and you can hear the seams a little bit on that “California Love”-tribute coda, presumably added more recently. But it’s an effective production and sits comfortably with recent Just Blaze projects like Drake’s “Lord Knows” and XV’s “Wichita.” Lately, the Just Blaze beats making it out to the public seem to be tapping into the Mike Will Made It world of foggy filters and druggy effects. He’s coating his early 2000s-style throwback bangers with flanger and Auto-Tune, giving them a sheen that smooths out their soul-sample grit and better fits them into radio rap’s current edge-less style of beatmaking.

Thanks to the just-released tracklist for good kid, m.A.A.d city, we know that “Compton” is the final song on the album — not counting bonus tracks, of course. It certainly sounds like an album-ending statement. And It also feels a little frustrating to even hear this song out of its album context. Dropping the last song as a single is a bit like teasing an upcoming movie with the final reel, you know? Perhaps, this is just more evidence that the appeal of the album as a sequence of songs that creates a quasi-narrative is non-existent for most. It also has me hyped to hear the album, if only to see how each piece builds to this just-grandiose-enough tribute to Compton.

Oh yeah: Look at that tracklist! None of those why-is-this-here? Colin Munroe guest spots like on Section#80; no Lady Gaga appearance, which really did seem inevitable one month ago; and MC Eiht is on this thing! There is little chance of Kendrick morphing into B.o.B, as I feared a few weeks ago. In other words, I’m preparing to put my foot in my mouth for all the Kendrick-doubting I’ve displayed over the past few months.