Former pop star Gary Glitter was arrested Sunday in connection with a massive child sex-abuse scandal revolving around a recently deceased BBC television host. Glitter, born Paul Gadd, was best known for the 1972 stadium anthem “Rock and Roll (Part 2),” until his 2006 conviction for molesting two preteen girls in Vietnam. Jimmy Savile, who died last year at 84, hosted Top of the Pops for two decades and had his own children’s show Jim’ll Fix It for nearly as long. He is accused of sexually abusing approximately 300 children and adolescents during his on-air career.

Though Glitter, 68, was released on bail 10 hours later, his arrest could be the first of many to follow. According to NPR, “one witness recently told a BBC-TV show [she] saw Glitter having sex with a schoolgirl in Savile’s dressing room at the broadcaster’s TV center in the 1970s.” In an editorial for The Daily Mail, BBC Trust chairman Chris Patten wrote, “The BBC risks squandering public trust because one of its stars over three decades was apparently a sexual criminal … and because others — BBC employees and hangers-on — may also have been involved.”

British police, who’ve dubbed their investigation into Savile “Operation Yewtree,” have described the once well-loved host as one of the worst sex offenders in recent history. He allegedly used his position on the two shows to coerce vulnerable girls, and sometimes boys, into having sex with him in and around the publicly funded network’s premises — in dressing rooms, his car, his camper van. BBC News says he may have found prey at hospitals, too. According to Sky News, members of Savile’s family knew about, and were victims of, his abuse.

Worse still, it appears some within the BBC were aware of the complaints against their employee. While it was BBC One’s Dateline-style Panorama that first made public the accusations (see The Guardian‘s roundup), BBC Two’s investigative show Newsnight had already begun, and then shelved, an inquiry into the alleged abuses. According to The New York Times, the latter’s top editor Peter Rippon was fired after evidence emerged that he wrote to a reporter, “The girls were teenagers, not too young. They weren’t the worst kind of sexual offenses.” 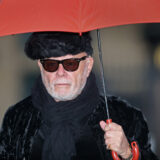 As London police continue to look deeper into the crimes committed, a parliamentary committee is questioning BBC officials and others to determine the extent of the network’s responsibility. As Patten asked in his Daily Mail piece: “Did some turn a blind eye to criminality? Did some prefer not to follow up their suspicions because of this criminal’s popularity and place in the schedules? Were reports of criminality put aside or buried? … How can we have allowed so many people and institutions to be mired in fawning over one awful man — a  devious psychopath?”

Gary Glitter had yet to issue a statement at press time.