When we visited Flying Lotus’ Los Angeles home back in July, the man born Steven Ellison was in the grips of some crippling jet lag. He’d awakened at 4 a.m., and nothing could make him fall back to sleep. Swimming laps in his pool, smoking blunts, drinking “lean,” popping a pill, even a wee-hours booty call. Nothing could return him to Slumberland.

It must have been a surreal experience, as he’d just wrapped Until the Quiet Comes, the fourth Flying Lotus album and the one that most closely resembles a lucid dream state. “I saw this record as a dream lullaby, mystical states, that whole experience of being innocent in this new world that you don’t really understand,” he explained. “I imagined Little Nemo on a flying bed floating over the city, and this is the soundtrack to it.”

That century-old Winsor McCay Sunday-funnies staple about a little boy tripping the fuck out under the covers is an apt comparison, as Quiet feels phantasmagorical, blurry, transmogrifying, bugging, and befuddling — not to mention slippery, woozy, fleeting, and funhouse-mirrored — with beats lingering just long enough before mutating into some new shape. Or, as musical partner Thundercat coos over an approximation of a pillow-y Mizell Brothers jazz-funk track, “I’m dreaming wide awake…I never want to come back.” Of course, that’s for something called “The DMT Song,” a minute-and-a-half-long ode to the chemical compound N-Dimethyltryptamine, which Northern California’s Erowid Center handily describes as a drug prompting “loss of connection to conventional reality with the encounter of ineffable alien realms.”

But funny enough, this is actually FlyLo at his most rooted, even if it’s within his own wholly altered reality. Throughout Quiet, he eschews the furious jazz-prog fusion chops that propelled him into the stratosphere on 2010’s Cosmogramma, his programmed beats here are more evocative of an R&B drummer than, say, Rashied Ali — in the pocket and subliminal in their cosmic funk. He says the beats were sourced from primitive drum machines and then finely minced; as the drums fade away on “All In,” the track dilates, and vocalist Niki Randa materializes like some fairy godmother amid the tubular bells, before those too wash away in a crystalline mountain stream. 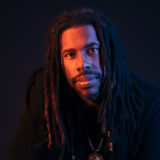 But one dribble of a canned beat from “Until the Colours Come” soon widens and flows into a skipping ride cymbal, a droplet of water from a rivulet expands, the river then expanding into an ocean by the onset of “Tiny Tortures.” At any point, any one sound can wormhole into a dozen new ones. The skitter of “All the Secrets” slows into the slurred G-funk frequencies of “Sultan’s Request” before shifting back into the daft clap-along of “Putty Boy Strut,” the clearest correlation between FlyLo and Aphex Twin in his “Come to Daddy” playful prime, the complicated programming rendered as child’s play. And on “The Nightcaller,” Ellison strikes a balance between Dâm-Funk’s Toeachizown and Aphex’s Richard D. James Album, the labors of two men committed to exploring the phantasmal realms they conjure and inhabit in real time.

Like a voice through a cloud, Erykah Badu’s silken “See Thru to U” emerges amid the toms, hi-hats, and Thundercat’s stand-up bass, proving that a much-hinted-at larger collaboration between the three would be a fusion-funk dream come true. And if Thom Yorke just happens to pop up in FlyLo’s nightmares once again — this time as the disquieting creep of “Electric Candyman” — then that makes a certain kind of Freudian sense. There’s the distant echo of Destiny’s Child incanting, “Say my name,” but Yorke’s warped voice firmly calls from across this Dali-esque landscape: queasy drums, reflection-less mirrors, melting clocks, grotesques.

At times, Until the Quiet Comes feels like the album version of Inception: dreams within dreams within dreams. Fully formed songs suggest themselves, but too often prematurely dissolve, with vagaries always favored over the tangible. Any grip on a beat or melody soon turns to hourglass sands; even at its most enchanting and ambient, it abruptly ushers you on to the next Kubla Khan. All too soon, Quiet‘s reverie plunks us back into reality before the vision can properly take hold.