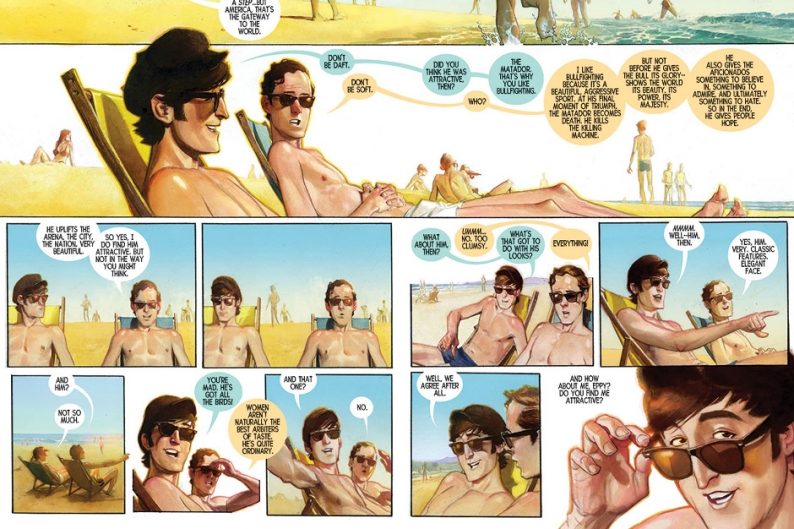 Your geeky friends and obsessed uncles will debate until they’re blue in the face over who deserves the hallowed “Fifth Beatle” mantle, but Paul McCartney once famously assigned the title to the man who discovered his band, and worked behind the scenes to secure their mega stardom: Brian Epstein. Though the Beatles’ manager may seem an unlikely subject for a graphic novel, one of the creators of Green Day’s American Idiot musical will tell the troubled English entrepreneur’s story in The Fifth Beatle, to be released by Dark Horse Comics next year.

Writer Vivek J. Tiwary unveiled the project at New York Comic Con last week, where he also announced that a corresponding film is being developed, which will include actual Beatles songs — rarer than you might think — as per a deal with Sony/ATV. According to the Wall Street Journal, Tiwary told the convention that he plans to explore Epstein’s personal struggles — he was gay in a time where being so was illegal in the U.K., and he was Jewish in a time of intense anti-Semitism. “Telling his story is a very passionate labor of love for me,” Tiwary said.

According to the website for the project, “The Fifth Beatle charts Brian Epstein’s discovery of the Beatles and his work to sharpen them into the stars they became — crafting their infectious image and presentation from truly rough and tough beginnings, securing a record deal when no one wanted to touch them, successfully bringing them to a world stage with a scale and scope no music impresario had ever attempted, and eventually proving through ‘Sergeant Pepper’s Lonely Hearts Club Band’ that pop music could be an inspirational art form.”

The synopsis also adds, “Brian Epstein’s boast — ‘The Beatles will be bigger than Elvis!’ — seemed absurd in 1961, but proved not just prophetic but humble by 1967.” That was, tragically, the same year in which Epstein died of an accidental overdose of sleeping pills. He’d risen from the head of a Liverpool music store, to the trusted decision-maker for the biggest band in the world, but he was notoriously lonely still. Tiwary called Epstein “a historical mentor I never met,” and said he studied the manager’s career closely while in business school.