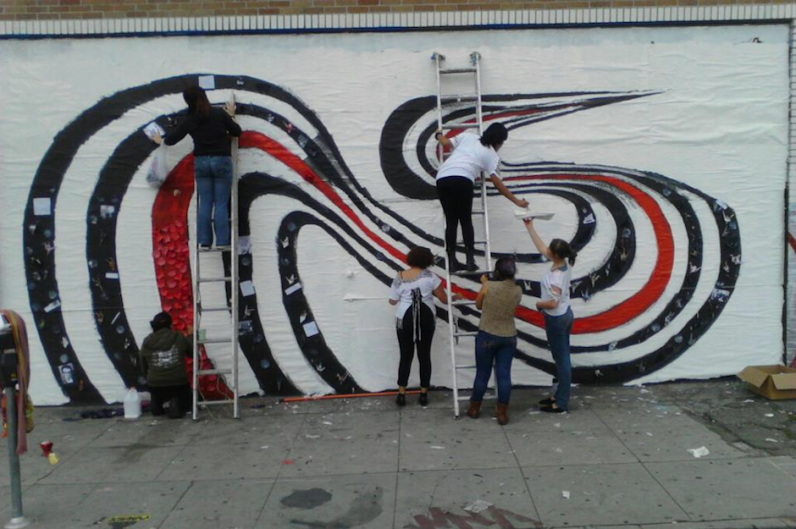 Elliott Smith died nine years ago, on October 21, 2003. To mark the anniversary, a group called the Punk Rock Marthas restored the mural that appears on the cover of the last album Smith released while he was alive, 2000’s Figure 8, as NME points out.

Graffiti had taken its toll on the mural, in Los Angeles’ Silver Lake neighborhood, so the group revamped it. Acknowledging no restoration of the mural could be permanent, the Punk Rock Marthas embraced temporariness in their choice of tools. Rather than simply repaint the mural, they incorporate recycled paper. For the red part of the mural, they hand-wrote every line from every song on a Smith album; for the black, they used maps, album covers, and other Smith-related items, plus 1,000 paper cranes for black; and for the white, they posed a sampling of fan messages.

Photographer Autumn De Wilde, who shot the image for the album cover, said in the 2007 book Elliott Smith that she went to high school near the mural, which was outside what was then a guitar shop called Sound Solutions. “I used to think it was the ugliest thing I’d ever seen,” she wrote. “Then when I got older, I thought it was genius.”

The site is now the location of Malo Restaurant, and the Punk Rock Marthas staged a benefit there yesterday with live music, food, a silent auction, and more. The event raised money for Free Arts for Abused Children, a beneficiary of Smith’s estate. No matter how long the restoration lasts, it’s a worthier fate for a mural that even Pink Floyd’s Roger Waters defaced a couple of years ago, and it’s a fond farewell to a gifted songwriter.