Return to Forever: Chris Carrabba on Reuniting With His Beloved Band

Home » Features » Return to Forever: Chris Carrabba on Reuniting With His Beloved Band

Before Chris Carrabba rose to raw-wound prominence with Dashboard Confessional, he was just one of the guys — but the guys were something special. As the vocalist in Further Seems Forever, Carrabba and guitarists Josh Colbert and Nick Dominguez, bassist Chad Neptune, and drummer Steve Kleisath released 2001’s emotionally searing, compositionally quirky The Moon Is Down. Carrabba left to pursue his own project shortly after, but the band continued on with Jason Gleason and then Jon Bunch handling the frontman role.

Carrabba rejoined the band for some shows in 2010. That spark has turned into a flame on the new Penny Black (Rise), out October 22, the first new album in 11 years from the band’s original lineup. Shortly before pitching Penny into the world, Carrabba spoke to us about this long-awaited reunion.

What had changed and what had stayed the same about working with the other guys in the band?
We get along a lot better, so that was different. There were a lot of battles when we were younger about how to be creative. And after all these years, we’ve all learned enough about ourselves, and each other, for that just to work now. So that was really different. Something that was the same, though, was our genuinely unconventional approach to songwriting. When we get together, we come up with these strange time signatures and key changes. We’re not trying to make anything sound strange or odd, we’re actually trying to make it not sound strange or odd, but that’s consistent with our old approach to writing. Another dynamic that’s still the same is that we work very slowly. I think that it’s good for quality control, but sometimes you just can’t believe how long it takes to write one song.

Is that just a matter of laboring over things?
It’s not that we take a lot of time to write the parts — it’s like a free-for-all. Any part is ready to be cherrypicked for any song. So for a long time, it could be like six months, you’ve got this section for one song, then you write a new song and say, “Let’s take scrap that other song and take that section.” Also, we’re not in the same position we were all those years ago. These guys have real jobs with real time commitments and I tour a lot, so we’re stealing the time to do the band. 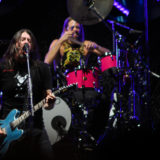 Given that Further Seems Forever has such an idiosyncratic style, was it hard to get back into a songwriting groove? Or did it instantly feel like you were back in 2000, 2001?
It didn’t take us very long to fall into a comfortable place and I think we immediately had a special dynamic. That’s what makes a band a band, those little intangibles that you either have or don’t have. But I would say that it took a bit to figure out. We were aware that we were trying to make sure we carry on some of the tradition that we started but also really virulently trying not to be a slave to that, which wouldn’t have shown any growth at all.

What was your impression of Further Seems Forever when you were no longer in the band? Were you a fan?
I’ll admit to being jealous the whole time that I wasn’t in the band. I loved how the music evolved. So I was dying to be back in this band, but there was no way to do it without pushing somebody else out, so I’d been resigned to just remaining a fan of Jason and Jon. Once I got a shot, it seemed like a bit of a no-brainer to get back with them. It’s just liberating to be allowed to play music again together.

You played a couple shows with the band, but when did it click that the reunion had enough juice for you to make a new album?
There wasn’t a lot of decision making. We had guitars in our hands to rehearse the older songs. Then somebody played something cool, then somebody else played something cool with it, and before you know it we were writing a song. I don’t think we set a goal like, “We’ll be making a record.” First we had three songs so we thought we’d do an EP. Then we had five songs so we were like “Okay, two EPs.” We just kind of kept going.

What did you bring to the band this time around that you weren’t capable of bringing before?
Well, I think that it was more of a collaboration this go-round. Where essentially one guy would write most of the song in the past, now it would be like, say I wrote a good guitar intro for “Penny Black,” I would resist the temptation to keep writing it. I’d say okay let me just take this piece in to the band. In the past I would’ve just kept at it until there was almost a whole song and then I would have brought it into the rehearsal space.

Do you have a sense of whether or not your fanbase has changed since you last were involved with the band? Are there many new Further Seems Forever fans?
I don’t have any sense of it. It seems like when we did that run of shows a year-and-a-half ago or whatever it was, it was a bit of a mixed bag. It was kids we recognized from the early days of being in the band, and then a certain amount of fans from each era of each record. And then some Dashboard fans too. I don’t really have any sense of who is our fan base now.

Is it liberating not to know that?
I don’t know if liberating is the right word. When you make your first record and no one is paying attention because they’ve never heard of you, you work in isolation and you work with a lot of freedom because of that. You don’t generally get another chance at that kind of freedom. You only get one chance at your first record. But because it had been so long and people were probably right to think that we’d never make another record again, no one was paying attention — just like the first time we made a record. So that’s liberating. That way we didn’t have to think about what anybody else would think about the record, and we didn’t have to think about if we were making the right kind of record. We didn’t think about any of that stuff. We just got together to make music.

So there was no burden of expectations.
Just the expectations we set for ourselves in terms of quality and how much new ground we wanted to reach. And also how to grow the thing up, which was as simple as making sure we stayed true musically to who we are, not who we were.

This may be difficult to pinpoint, but what emotional or musical itch do you get to scratch with Further Seems Forever that you can’t with Dashboard Confessional?
It’s difficult to verbalize, but I’ll try my best: It’s just the combination of the guys. I’ve never found that anywhere else. I’ve written plenty of odd time signatures and strange key changes with Dashboard, but that’s just not the same as being in a band where there’s never an attempt to do anything “Further.” It just is. These guys have a very peculiar musical sensibility that is really inspiring to me. It’s this strange combination of absolutely from the hip, from the gut, and powerfully high-minded. It’s impressive. I’ve tried to do similar things with other people and it sounds like I’m trying to do it. With this group, it just is what it is.