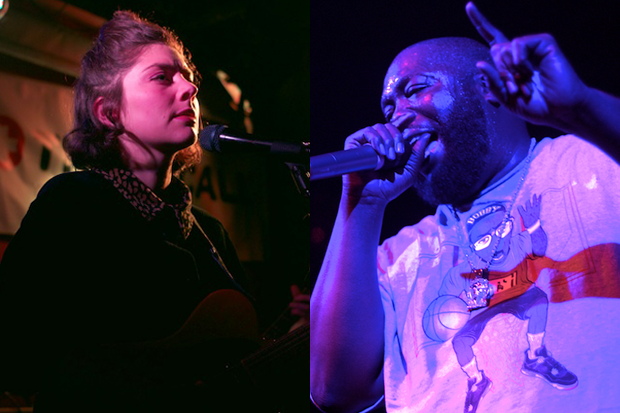 Another year, another 1,300 (somewhat) wide-eyed acts have passed through New York City for CMJ's annual Music Marathon. SPIN sampled as many yellers, rappers, ranters, crooners, noodlers, beat-makers, and record-spinners we could cram into our schedules during the fest's four days and come to a consensus: The 10 artists here deserve golden hot dogs for making all the frantic cab rides and long lines worth the effort.

Another year, another 1,300 (somewhat) wide-eyed acts have passed through New York City for CMJ's annual Music Marathon. SPIN sampled as many yellers, rappers, ranters, crooners, noodlers, beat-makers, and record-spinners we could cram into our schedules during the fest's four days and come to a consensus: The 10 artists here deserve golden hot dogs for making all the frantic cab rides and long lines worth the effort. 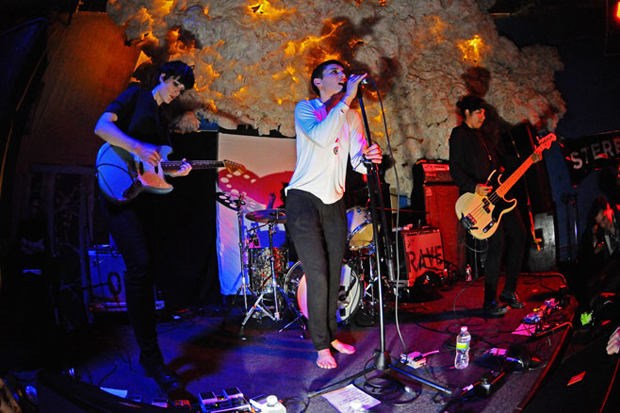 With only a self-released live EP to their name, yet having appeared on Jools Holland’s influential BBC show Later…, the blindingly accomplished female foursome Savages were one of the few bands at CMJ who were (sort of) in search of a record deal (with the caveat that they won’t release a full album until they’re absolutely ready). As such, this Stereogum-sponsored gig was sprinkled with older British gentlemen jostling for position. Regardless, Savages, dressed all in black except for barefoot singer Jehnny Beth’s white T-shirt, were in their own steely trance, concerned with dramatic dynamics over hooks, and at their best when hurtling and rumbling, as opposed to exploring subdued moods. At times, they do recall original post-punks Siouxie and the Banshees and Joy Division, but a more recent parallel might be the Rapture. They’re clearly still developing their own sound, but there’s no denying the furious talent on display. CHARLES AARON 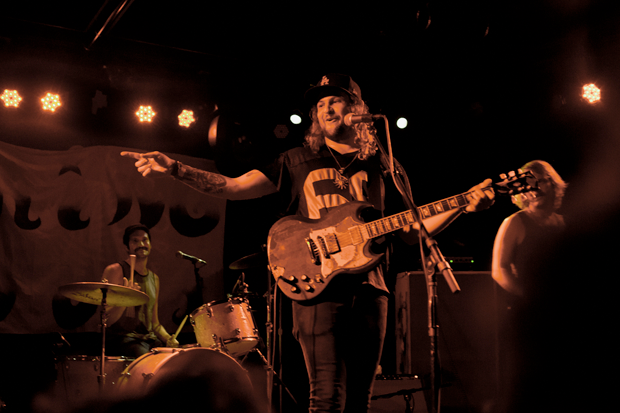 “Where’s my fuckin’ cherry?” announced Kyle Thomas, typically juggling drinks, stage banter, and frontman duties for indie-punk funpack King Tuff. Both live and on record, the Tuff foursome have a natural slur while bashing through their healthy assortment of raw, riffy gems. In appearance, they could be summed up as Fozzie Bear (the unshaven, unkempt, but high-spirited Thomas), Wooderson from Dazed & Confused (bassist Magic Jake), and a couple of wiseass lobster fisherman (on guitar and drums), but the tunes are remarkably polished nuggets. Here’s a band that probably could’ve existed at any point in the past 30 years, in terms of sound and attitude, but be grateful they’re around now to take the piss out of their less talented and more pretentious peers. CHARLES AARON 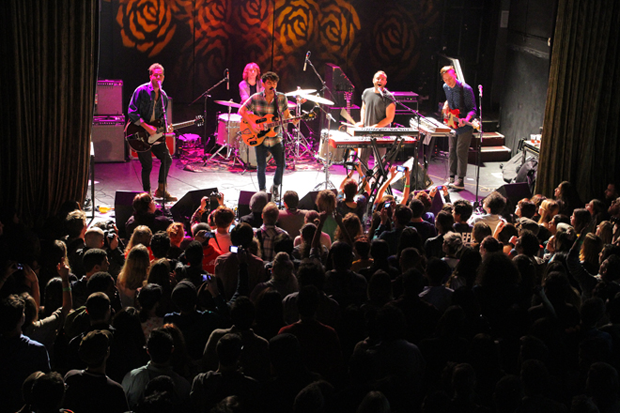 Local Natives' CMJ show was all about breaking new ground. Not only was it the quartet's first show in ten months — and first New York gig in two years — but the band debuted a crop of songs from their upcoming sophomore effort Hummingbird, due in early 2013. Heard in front of a buzzing, enthusiastic crowd at Manhattan's Bowery Ballroom, the new songs came off like more sophisticated cousins to the soaring folk-rock of the band's 2009 debut, Gorilla Manor. The trademark harmonies are still intact, but the instrumental sections feel lusher, more orchestrated. The expansive music was mirrored in the lyrics, too, especially on "Colombia," on which the band asked the big questions: "Do I care enough?"; "Do I love enough?" Other standouts included the calmly glistening "Ceilings" and the somber (and aptly named) "Bowery." The show's finale was also its highpoint, though. During Gorilla's impassioned "Sun Hands" the crowd rattled the building with stomps and triumphant sing along oh-oh-ohs. Judging from the new material, there will be more of these nights to come. CLAIRE LOBENFELD 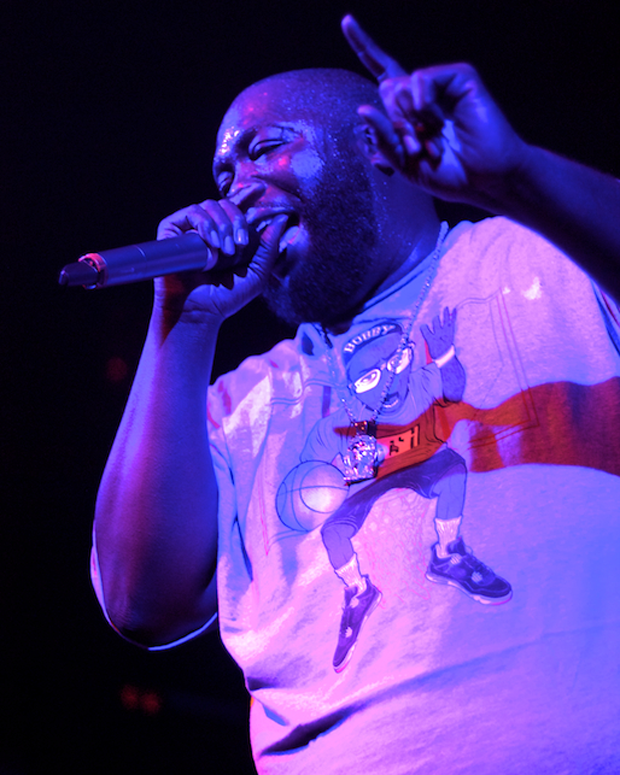 Unlike so many starry-eyed CMJ acts, Atlanta rap master Killer Mike, 34, isn't hoping for a first shot. He's been around. But he hasn't lost his fire. Playing early on a Thursday evening at the small Studio at Webster Hall, Mike aired surging, galvanizing tracks from his standout R.A.P. Music. But the most powerful moment featured no music at all: Just Mike up on stage, doing an a cappella version of his single "Reagan." "The ballot or the bullet," he intoned angrily. "Some freedom or some bullshit." Then he gave a speech about why we should make sure to vote. It was the kind of performance that mattered for reasons having nothing to do with the hyper-truncated CMJ hype cycle. DAVID MARCHESE 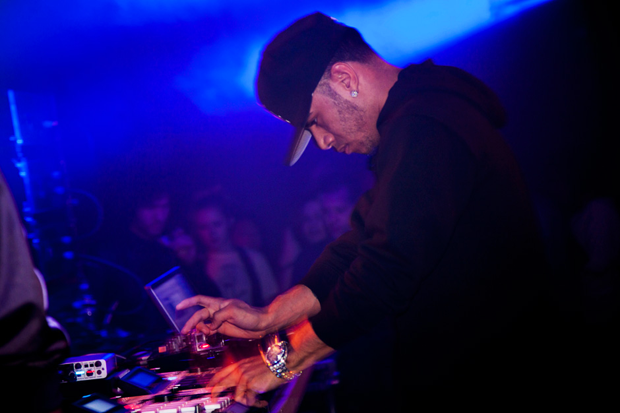 With his side-by-side MPC drum machines, the Dipset producer and EDM shit-stirrer immediately jacked up the mood at SPIN's CMJ party to operatic levels of percussive drama. The last sound that was easily comprehended was his familiar, female-voiced "You are listening to AraabMuzik" ID; after that it was a ferocious barrage of deafening samples, rat-a-tatted into a head-banging free-for-all of hi-hats and gasping, squalling, screaming synths, with bass-drop detonations chopped up and sprayed around the room. For a man who has incorporated Cannibal Corpse into his sets, this level of demonic beat-frenzy wasn't shocking, but to experience it live goes beyond the usual earplug-pounding volume. It's the sort of physically jarring assault — reminiscent of everyone from Glenn Branca to Flipper — that leaves you both smiling and on the verge of tears, asking yourself simultaneously, "Why would anybody do this?" and "This guy is a fucking genius!" I felt like I was gonna throw up; but in a good way. Which is appropriate for CMJ. CHARLES AARON 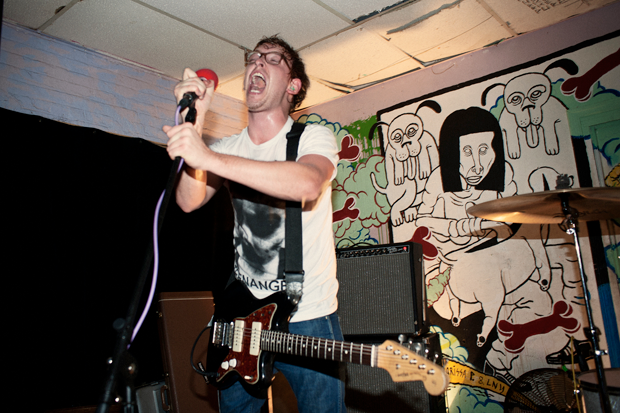 Pitchfork’s unofficial showcase was at a tricked-out warehouse space in the heart of Condoburg, Brooklyn, full of cameras filming a YouTube Livestream, along with cornball between-band interviews. Apparently, there was also an open tap of free substances of one sort or another in the vicinity because the acts in the middle of the bill — especially Daughn Gibson and Merchandise — were utter disasters, slobbering incoherently through their sets, while rapper Joey Badass, in addition to being miscast for this crowd, was hardly audible for much of his time onstage. But the Toronto noise-punk trio Metz, on the other hand, were wild-eyed and brutally focused. Playing maelstroms more than songs, they’re like a less unhinged Jesus Lizard, full of coiled ferocity that engulfs you, releases you briefly, then swallows you up again. This year’s Sub Pop debut only hints at their live intensity. CHARLES AARON 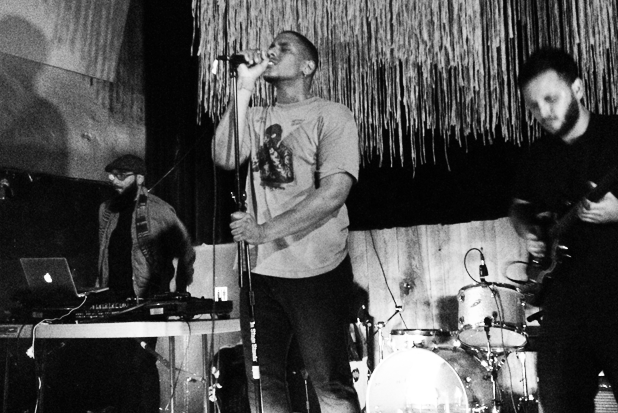 Clark, whose Fornication Under Consent of the King, is one of 2012’s most impressive releases, R&B or otherwise, had two CMJ gigs — first at the Euro-trashy Le Baron and then at the cramped Brooklyn afterthought Cameo (neither particularly suited to his talents. But Clark did nothing to dim the approaching spotlight for his subtle, sinewy mix of R&B, hip-hop, and rock. He’s a keeper. CHARLES AARON 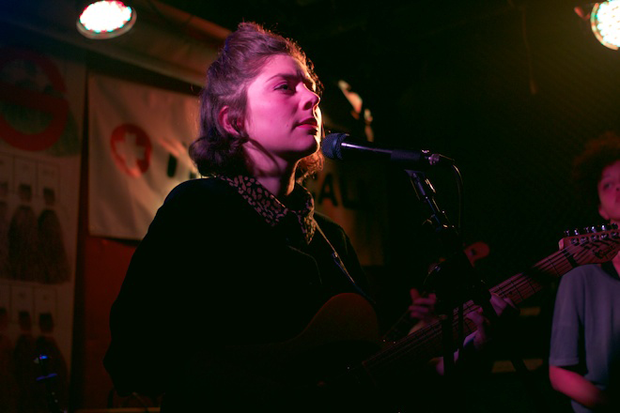 Brooklyn gonzo-soulsters Ava Luna don't stay in one place long, but they always end up somewhere interesting. Singer-guitarist Carlos Hernandez comes off suave, singing falsetto in a warm, airy voice, and then will suddenly rev into a hoarse throaty shout. His band is similarly mercurial. Backing vocalists coo then growl. Rhythms glide then lurch. Guitars and synths chime and burble in sweet counterpoint before bubbling over noisily. Ava Luna, which released its promising debut, Ice Level, earlier this year, was at times reminiscent of a more aggressive Dirty Projectors in its pinpoint direction changes, but when Hernandez locked into, and then shattered, one of his soulful melodies, they sounded most like a band wonderfully willing to take chances. DAVID MARCHESE 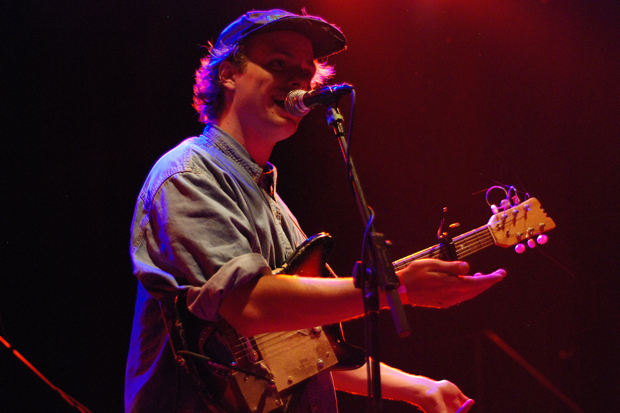 With a baseball cap sitting askew atop his messy blond hair and a goofy grin, Montreal guitar-pop dude Mac DeMarco, 22, comes off as a bit of a joker. He plays the part, too. At one point during his set, he launched his band into a sloppy shuffle blues with improvised lyrics about the bartender. When he gets serious though, he's something else. Snappy and lovelorn, songs like "My Kind of Woman" and "Viceroy" evince some of the casually effective raggedness of Wowee Zowee-era Pavement and plainspoken emotional honesty of Girls' Christopher Owens. None of DeMarco's songs quite reach those artist's heights, but there's enough in them to suggest he one day might — when he's not busy spitting beer into his bassist's mouth. DAVID MARCHESE 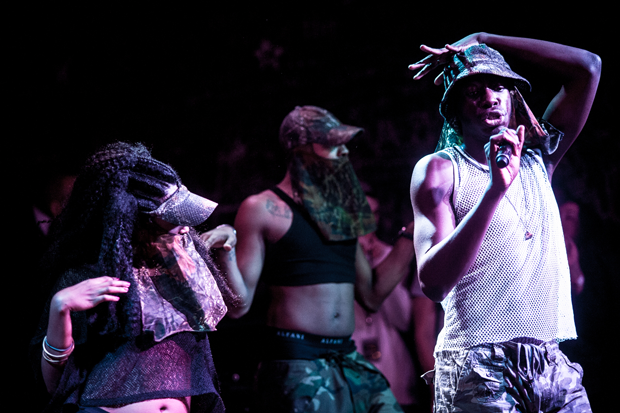 Partially produced by the rapper himself plus beats from assorted producers including Nguzunguzu, Le1f’s mixtape Dark York is a full sonic immersion into club-music’s most disorienting jerk and churn. His sexual preference plays a role, but recedes into the beat-blur for significant stretches. Conversely, as a live performer, at his CMJ gigs, including this one at the small space Cameo, Le1f wants to pull you close and make you feel good about his body, giving his raps a direct physical expression, doffing his shirt and twisting and turning like a post-voguing avatar. But it’s his track “Wut” that proves he’s a legitimately combative lyricist, busting out a double-time statement of “hit ‘em wit da hee” purpose. CHARLES AARON