The self-titled 12" reissue, due out on November 20 via the band's own label, will come with a new fanzine 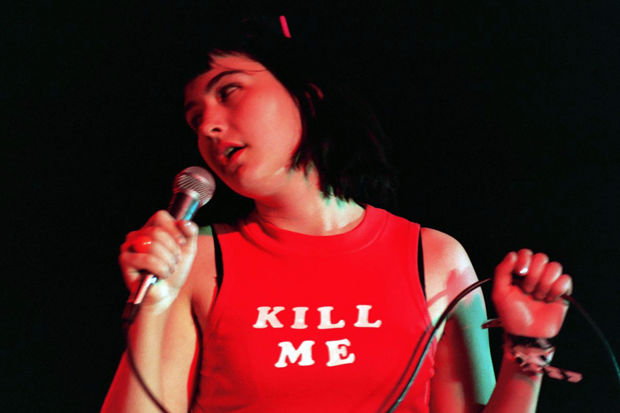 Bikini Kill are starting to make good on their promise to reissue the full BK discography, and how! In July, the riot grrl quartet announced the launch of their own label, Bikini Kill Records, to handle the reissues. Earlier this week the Kathleen Hanna-fronted group announced the label’s first release will be a reissue of their self-titled 1992 debut 12″ EP, and it sounds like they’re doing it up with characteristic style.

Due out on November 20, the vinyl reissue will come with a new fanzine in the form of a 34″ x 21″ poster. The zine will include interviews with Minor Threat/Fugazi leader Ian MacKaye and Bratmobile drummer Molly Neuman, plus liner notes by former Skinned Teen member Layla Gibbon, excerpts from the band’s old zines, and personal photos from the band members. MacKaye recorded four songs on the EP at Washington, D.C.’s Inner Ear Studios. The six-song EP also includes a track from the band’s 1991 demo tape and another song recorded during an April 4, 1992, live performance at Washington, D.C.’s Sanctuary Theater.

In a way, the idea of a polished-up reissue of Bikini Kill’s self-titled first EP is a paradox. As drummer Tobi Vail wrote recently for eMusic (via Judy Berman), the idea was to demystify the process, to reveal the means of production. “We weren’t interested in perfection,” Vail said. “We were agitators. We wanted all girls in all towns to start their own bands. We thought if that happened, the world would change.” It’s no surprise Hanna was an early and vocal supporter of jailed Russian punk band Pussy Riot.

See where Bikini Kill ranks on our list of “The 40 Greatest Band Names of All Time.”