The news comes via AVN, who fluff the hell out of their story: “He could very well be smiling after charting four songs on the Billboard Hot 100 in the past year … but today [Tyga] is grinning from ear to ear because he’s watching Sophie Dee getting railed by Lexington Steele on the deck of an infinity pool.” 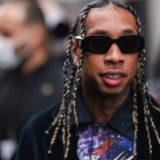 “This is really me, this is really my vision,” Tyga told AVN. ” This isn’t something someone handed to me and I’m just hosting and putting my name on. I’m really producing and doing the whole film. A lot of people are gonna be interested in it and of course girls are gonna want to see it.” Of course.

Amongst his “Rack City Bitches” are Jada Fire and Ice La Fox, representing the old school, along with some young up-and-comers like Skin Diamond and London Keyes. The lineup is available to check out over at the site, where you can also purchase T-shirts and become a member for $24.99 a month.