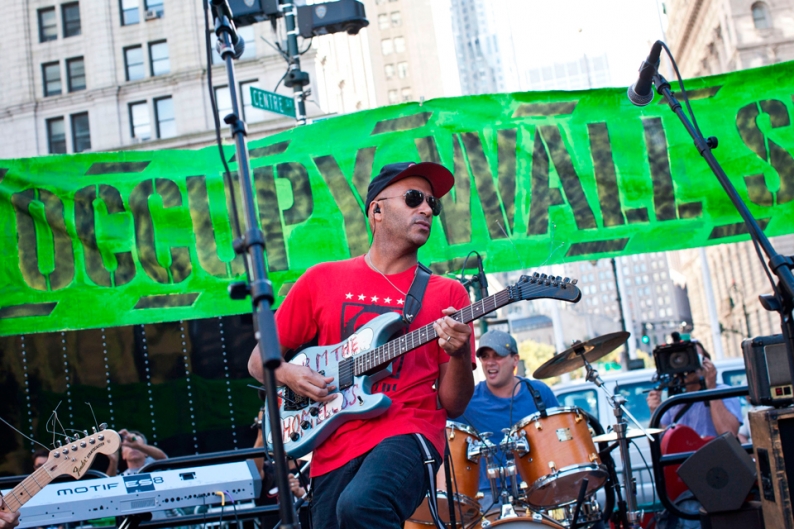 Onetime Zuccotti Park occupier Tom Morello rages against the one percent in a new fist-pumping protest anthem, “We Are the 99 Percent.” The Rage/Audioslave guitarist co-wrote the chant-heavy rawk track with “brothers-in-arms” Tim McIlrath of Rise Against and System of a Down’s Serg Tankian as a “gift” to the Occupy Wall Street Movement on the heels of its one-year anniversary. Recorded at Morello’s Veritas Studio in Los Angeles, the song sits on a “Testify”-era riff that growls beneath crowd-sourced shouts of “We— are— the 99 percent! We— want— everything!”

Morello tells Rolling Stone, who hosted the song’s premiere, “I wanted to do a huge riff-rock anthem… It would feel like the excitement of the global Occupy Wall Street movement.” It’s not all hard edges, though. Perhaps as a nod to protest music’s folk foundings, “We Are the 99 Percent” dips into a brief acoustic breakdown as Tankian asks, “Were you born to serve your betters?” — before Morello shreds through a guitar solo.

“We Are the 99 Percent” is available for free download here.

Nicole Sia
Tags: rage against the machine, rise against, serj tankian, Songs, System of a Down, tom morello