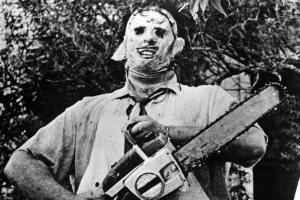 Though the most singable song in Texas Chainsaw Massacre was the jaunty fingerpicker “Fool For a Blonde,” what really revved up this 1974 gutsapalooza to a horrific breaking point was the creeptacular sound design by director Tobe Hooper and his buddy Wayne Bell. Eschewing traditional songs, they filled the film wall to bloody wall with inhuman drones and rattles and scrapes and squeals. And they’re reported to make some of this nail-biting tension via DIY means — like scraping the prongs of pitchfork.

Avey Tare: I had read somewhere in high school that the soundtrack to Texas Chainsaw Massacre being described as musique concrète in Rolling Stone or something. I was like ‘music concrete?”

Geologist: I thought that was the name of the soundtrack.

Avey Tare: I never heard that term before when I was in high school. It had always been a goal from that point on: I’m gonna find the soundtrack to Texas Chainsaw Massacre on vinyl someday. And it, in fact, doesn’t exist. I think that was the first type of sound-oriented music I really got into and connected to. Some of those sounds on there sound like weird violin-industrial errrnwhiirrrrnnn. How does he get those sounds? I wanna know how to make sounds like that.

Geologist: It made us experiment with things in our own house. I remember this one time we had this comb, and you put it up to you ear and use your thumbnail. It sounded like a moment in Texas Chainsaw Massacre; and maybe that’s how they did that sound. If you take this thing from the kitchen and do this with it. It’s fun!

Avey Tare: It pushed me and Brian to start making music like that. Lets just bang on a lot of shit for a couple of hours, put it through delay, and make it into something that actually makes sense