"Because night time is the only time" 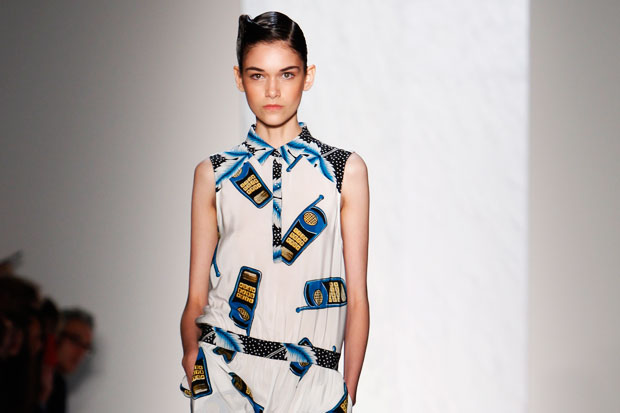 HOOD BY AIR
For several years, Hood by Air (run by Ghe20 Gothik’s $hayne Oliver) has been influencing the direction of forward-thinking club kids (and well-funded runway designers like Rick Owens by proxy.) Long before every street-style website offered a three-inch-tall flatform shoe, HBA was making custom platform Timberlands for Maluca; long before Rihanna rocked revitalized BOY London club kid gear, HBA was reimagining their brass-plate caps. Last year, their line of Classic tees hijacked the Paramount Pictures logo and ended up on the back of A$AP Rocky. This year, the label pays homage to the original Windowlicker, splashing Aphex Twin’s most demonic face across a t-shirt and expecting us all to sleep despite it with pajama party-influenced Hood By Air pillowcases and men’s denim night skirts, a little bit Buffalo, a little bit Ben Franklin — because night time is the only time. SUNO
Generally the king and queen of to-die-for mix-and-match prints, designers Max Osterweis and Erin Beatty opted to tone it down at a time when a slew of other designers were ramping it up. Okay, but whatever, can we discuss this single look in a cordless phone pattern that didn’t repeat itself for the rest of the show? Full stop, the whimsy of it was an easter egg among all their iridescent poppy florals and Dutch-inspired tunics, a late-in-the show pick-me-up that encouraged us to gauge all other looks from there. A comic-book drawing of what might be a baby-sized Nokia from the early ’00s, it had recent-vintage flavor but felt like so much more than just an ode to the Beeper King; it was as though, by referencing Amish simplicity, boat-ready stripes and, to be honest, Laura Ashley wallpaper in the rest of their collection, they were positioning the cordless phone pattern as a future entry into classic Americana. Which is genius. The silhouettes were breezy and wearable with nods to prairie girl dust-ruffles, but it really was all about that cordless phone, again shown only that one time, Suno batting their eyelashes at us just before a wink and a pound. Goddamn!

CHARLOTTE RONSON
For a designer who tends to stay on the dainty side, with pointelle rose patterns and a constant stream of butter-yellow, musician Mark’s elder sister has gone outside her comfort zone, and she’s all the better for it. A cut-out skater dress in navy, blue, and cream gave her femininity a tiny razor-point, while her openness to sheer, mesh, and lace emboldened the silks and ruffle zone she is comfortable in. To die for: all the clear, tailored bomber jackets, good for going to the club in a rainstorm, with the inherent understanding that you’ll probably take a cab, anyway. (The sky blue one, in particular, mimics the cloud-and-ocean pattern of a peplum dress.) If you wore them together, you might just float away. Or join some kind of post-Bleached surf band.