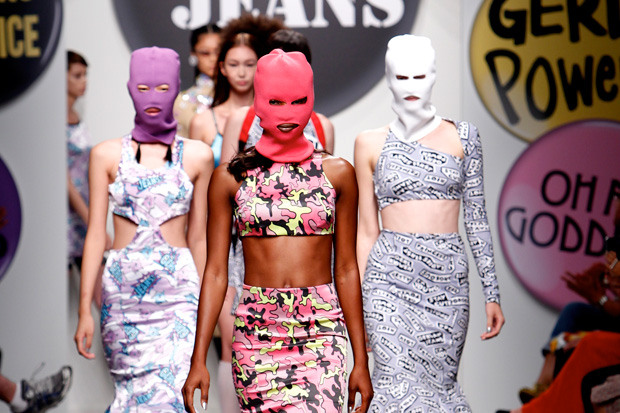 GERLAN JEANS
While the voice of Pussy Riot echoed a bit throughout fashion week — Le1f played them in his soundtrack for Patrik Ervell, for one, listenable via Opening Ceremony — but Gerlan Marcel was the first to actually put their visages on the runway. For her wedding finale, she sent three models in fishtail skirts and crop tops in pink camo and the ’90s rave kitty, accessorized with neon renditions of the Pussy Riot balaclava. It wasn’t just representational, though — the show’s partial theme was “Gerl Power,” and Gerlan pared down her traditional pattern-love for thrilling, strong statements that were as feminist as they were fun. Resurrecting the ’90s notion that visible lingerie and badass attitude is subversive — because she is never asking for it — she showed bras, garter belts, slips and thigh-highs with pink boxing gear and bold statement tees with slogans like “Nobody’s Property.” The best look: a nude-simulacra croptop tank adjacent a pie-sized button of the woman symbol and pink camo miniskirt, an inherent challenge with the threat of being stomped out by knee-high Tank Girl Docs. Backed by a soundtrack compiled by Venus X that blended ballroom house “ha”s with banging B’more beats, some models stomped down and shadowboxed at the end of the runway, hanging tough with the theme.

In contrast, Gerlan’s line for Disney’s Minnie Mouse was perfectly feminine, and her creative interpretation of the iconic goyle was a total hit. No played out mouse-ear headbands here: the models were Minnie’d out in aqua and pink braided buns, and Minnie’s polka dot outfit came in the form of Peter Pan collars and streamlined simplicity. Nothing too literal: a few ruffles on shortpants here, a bodycon dress with a giant bow flourish there — Gerlan re-envisioned super girlie Minnie for the contemporary chica, keeping with her palette while blowing out the details. The flowing polka jumper in blue! Front row royals Santigold, Kelly Osbourne, Angela Simmons, and Vashtie seemed to feel the same — when Gerlan emerged for her final bow, the downtown set applauded like she’d just finished a set at Santo’s.

CLOVER CANYON
Channeling Southern California paradise through stony, glassy eyes, Los Angeles designers Rozae Nichols and John Parros went road-tripping to Baja recently and imprinted their experiences on shapely summer short-suites and boatneck tunic tops. While screenprint imaging is getting kind of played (even Victoria Beckham showed looks this season that Risto Bimblioski’s been doing for five or six years), Clover Canyon flipped it beachside with a weed card, showing surf prints (uh-oh, Proenza Schoeler), formal Aztec, the wide open road and, most notably, office suits splashed with the five-pronged leaf of the marijuana plant. Taking bets on which pop star’s wearing this first, though we’re imagining a showroom slam-down drag-out fight between the stylists for Lady Gaga and Rihanna.

LADY GAGA FAME PERFUME LAUNCH AT THE GUGGENHEIM
Speaking of Gaga, she launched her new black perfume last night and got a live tattoo of a Raphael-esque cherub on the back of her head at the party, no big deal. It’s actually not that big of a deal — the Guggenheim is the selfsame site where Marina Abramovich stood butt-ass naked for seven full days in homage to her recently deceased friend Susan Sontag — but applause to Gaga for commemorating the night. More exciting was the film shot by famed photographer Stephen Klein to commemorate the occasion, which casts Gaga as a gilded Gulliver with a robotic psychosexual demon inside of her. It looks pretty cool, but also pretty Zoolander, which we’re assuming was on purpose. Camp is the concept that makes the world go round. So, until next season: