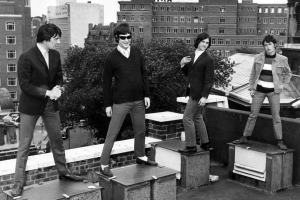 Ground zero for garage rock, metal, and punk, Brit Invaders the Kinks scored their first UK No. 1 in 1964 with “You Really Got Me” and went on to land 14 more beyond-catchy Top 10 singles over the next decade in spite of the volatile relationship between the group’s songwriting nucleus, brothers Ray and Dave Davies. When they were on, though, they were really on, releasing feel-good hits that alternated between tongue-in-cheek humor (“Dedicated Follower of Fashion,” “Lola”) and heart-on-sleeve earnestness (“Waterloo Sunset,” “Days”), inspiring future hit-makers like Van Halen, the Jam, Oasis, and AnCo, who have been known credit Kinks-ian harmonies as an influence before the more commonly cited Beach Boys.

Avey Tare: It’s weird, we don’t tend to bring Ray Davies’ songwriting up very much in interviews, but yeah, there was a time where we got super into it. I still go back to them.