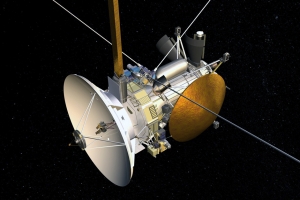 Not content just to frolic among Earth’s flowers, centipedes, strawberries, fireworks, rabbits, and bees; the moonjocks in AnCo have been known to get downright cosmic, even borrowing a sample from NASA’s $3.2 billion Saturn probe, Cassini. The orbiter has been floating around our solar system’s second largest (and most aesthetically pleasing) planet since 2004, discovering three new moons, exploring lakes on Titan, and observing the first hurricane we’ve seen on another planet. But, most importantly, it blasted radio waves through the Saturns rings in an attempt to determine their structure — inadvertently sending some gorgeously out-there sounds our way.

Geologist: [The “My Girls” intro], that’s a combination of, um….Well the main synthesizer does the arpeggios, but then it’s mixed with recordings from the Cassini satellite, when it was in the rings. It had a microphone going. I don’t know if it was pitched up or pitched down, but NASA definitely did something to make whatever frequencies it was receiving audible. And then it was on the New York Times website or something, you know, so a handful of people sent it to me. Like two or three separate people sent it to me and were like “I think you should use this on an Animal Collective track.”