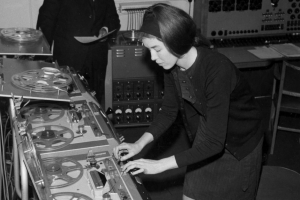 Established in 1958 by Desmond Briscoe, Daphne Oram, and others to create a palette of sounds for various BBC programs, the Radiophonic Workshop quickly became as much research center as music production facility. A home for experimenters including Delia Derbyshire and Brian Hodgson, who would co-found White Noise, the Workshop grew renowned for its music for Dr. Who, but its ground-up homebrewed synthesis would resonate in every pop epoch, from Jimi Hendrix producer Eddie Kramer, to bands like Broadcast and Portishead, all the way up to Geologist.

NEXT: The Beatles — Revolver